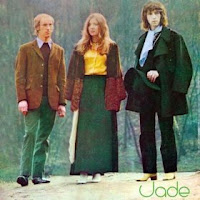 This little known UK Folk Rock classic was released in the early ’70s. Issued in England under the band name “Jade”, it’s a fantastic album featuring the Sandy Denny-like vocals of Marian Segal. Orchestrated, melodic songs, powerful folk rock with electric guitar harpsichord, and soaring vocal harmonies, this has to be up in the top ten UK folk rock albums of the period. Jade were a British electric folk trio led by Marian Seagal. The style is similar to Sandy Denny’s non-traditional stuff like “Who Knows Where the Time Goes?”
Guesting on the album are some famous session players including Pete Sears (later Jefferson Starship), Micky Waller (Jeff Beck Group / Rod Stewart) and John Wetton (Crimson). If you like this be sure to check out her album made 35 years later in collaboration with Circulus.