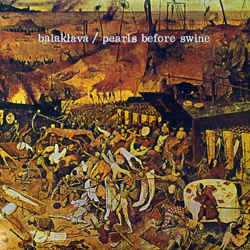 Balaklava is one of the most extraordinary, sublime and sophisticated protest albums of 1968. To many, this album represents Tom Rapp’s surrealist song-craft in perfection. Not a foot-stamping anti-Vietnam war album but a complex and psychedelic masterwork that touches on Tennyson and Tolkien in a sublime metaphorical fashion. Tom Rapp is among the most erudite, intellectual songwriters of the American ’60s era.

The psychedelic folk band Pearls Before Swine was the brainchild of singer, composer and cult icon Tom Rapp, born in Bottineau, ND in 1947; after writing his first song at age six, he later began performing at local talent shows, and as a teen bested a young Bob Dylan at one such event. Upon relocating to Melbourne, FL, Rapp formed Pearls Before Swine in 1965, recruiting high school friends Wayne Harley, Lane Lederer and Roger Crissinger to record a demo which he then sent to the ESP-Disk label; the company quickly signed the group, and they soon travelled to New York to record their superb 1967 debut One Nation Underground, which went on to sell some 250,000 copies. The explicitly anti-war Balaklava, widely regarded as Pearls Before Swine’s finest work, followed in 1968; the group — by this time essentially comprising Rapp and whoever else was in the studio at the moment — moved to Reprise for 1969’s These Things Too, mounting their first-ever tour in the wake of releasing The Use of Ashes a year later. Two more albums, City of Gold and Beautiful Lies You Could Live In, followed in 1971; moving to Blue Thumb, Rapp resurfaced as a solo artist with 1972’s Stardancer, but upon the release of Sunforest a year later he then retired from music, subsequently becoming a civil rights attorney. Frequently cited as a key influence by the likes of Damon & Naomi, the Bevis Frond and the Japanese psych band Ghost, Rapp made an unexpected return to live performance in mid-1998 when he appeared at the Terrastock festival in Providence, RI, joining son Dave and his indie-pop band Shy Camp; he soon began work on 1999’s A Journal of the Plague Year, his first new LP in over two decades. Constructive Melancholy, a retrospective of Pearls Before Swine’s tenure on Reprise, also appeared that same year. This sparked renewed interest in the band, with Water music releasing a box set of the Reprise material in 2003 (Jewels Were the Stars) as well as a set of unreleased demo and live recordings entitled The Wizard of Is. ESP also remastered and combined their first two albums as The Complete ESP-Disk Recordings in 2005.