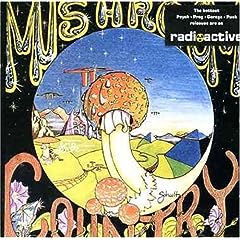 Another private pressing from a band that recorded a single record only to disappear without trace immediately after. Peter Stark’s Mushroom Country, with its unusual phallic mushroom artwork and ‘cosmic folk’ groove, has become an extremely collectable album of late. Recorded at The Mike studio in Ann Arbor, Michigan, the album appeared on the Montage label in 1976, although for some reason no catalogue number was assigned. The album features 8 original works by Stark and his brother Ben, and a particularly fine cover of Donovan’s ‘Hey Gyp’. Musically, the album takes us on a tour of genres, from the instrumental ‘Raga For Bayleaf’, the folky ‘You Make Me Feel’ and the blues of ‘Searching’. There is a real charm about Mushroom Country, with its varied instrumental accompaniment to Stark’s vocals and fluid guitar and a ‘we’re having a great time doing this’ vibe that pervades throughout. Hippie folk? Well, possibly, but none the worse for that. (Forcedexposure.com)

From Ann Arbor, Michigan, this album contains acid folk music, with a cover of Donovan’s Hey Gyp, some ragas (Ragas For Bayleaf) and fluid guitars. Housed in a nice sleeve, the album is now extremely rare and sought after.