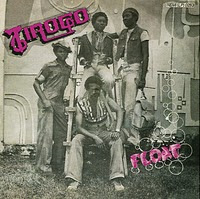 Originally released in Nigeria, 1977. “Tirogo is another great sample of lost African psychedelic music. It was recorded in Nigeria in 1977 and originally released on EMI, same as the great album BLO – Chapter One. This Nigerian rock-psych band Tirogo is similar to bands such as Ofege, BLO, Founders 15, Doves, and Aktion. Great African songs covered with wild guitar solos, spooky organ, great beats and strong vocals. 4 guys on the cover / 6 were actually in the band looking pretty young. It is getting harder and harder to find lost African bands since there is a big rave in the International music scene to hunt for good material. With the massive help of collectors and Now Again Records in the USA, who actually went to Nigeria to sign the boys, we are able to present this amazing album to you. It will suit the same music lovers who like Amanaz, The Witch, Question Mark and BLO.” (fusetronsound.com)