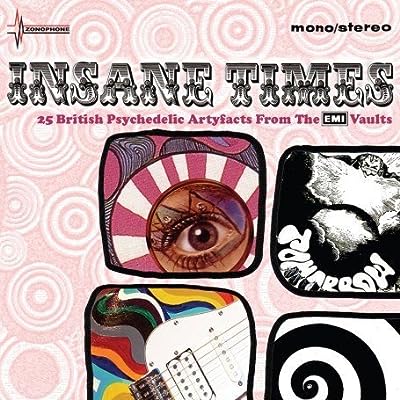 The compilation kicks off with the staggering and brilliant groove of Song For Insane Times by Kevin Ayers. With a vocal delivery not unlike Nick Drake, and a shimmering groovy backing of strings, skittering beats and blissed out piano, Ayers nails a very unique brand of Britsike and delivers the fantastic line “we all sung the chorus of I Am The Walrus”. As comp openers go, this is one of the best you’ll ever hear.

Hot on the heels of Ayers is the mental wrongs of July and Dandelion Seeds (single version). The song is pretty tough and has a vomiting guitar sound that wouldn’t be out of place on an Os Mutantes LP. Wretching and heaving atop a fierce overdriven freakbeat, Dandelion Seeds is as out there as you’d expect. Of course, being influenced by huge doses of acid, it’s not long before the single implodes and disappears into a subdued electronic track with cavernous reverbs and echoes before unleashing a ferocious guitar solo that manages to narrowly avoid falling to pieces.

Amongst the madness are some well comped tracks like Real Life Permanent Dream by Tomorrow (worth hearing again mind you), Syd Barrett’s No Good Trying and The Penny Peeps Model Village. However, most of these tracks have featured on obscure box sets and the like, so this comp is well worth taking a punt on if you don’t fancy shelling out Â£50 or so.

Some of the tracks border on self indulgent… but it’s a psych comp… you really should know what you’re getting yourself in for. One such track by the preposterously named Mandrake Paddle Steamer features serious axe work with a spliced coda built around some session men playing the Incredible String Band’s Maybe Someday’. Strange Walking Man may be hard work on the ear, but it’s a good laugh and worth hearing.

A great hidden gem can be found in the fantastic Last Cloud Home by The Orange Bicycle. You might know the band from their Hyacinth Threads 45 which topped the French charts in 1967. Interestingly enough, the man behind this driving psych number – Wil Malone – went on to produce and arrange for bands like Massive Attack and The Verve. It would seem that his best work came and went in the tail end of the flower power era.

Dadaists, Bonzo Dog Doo-Dah Band show up with the brilliant and hilarious Equestrian Statue. It’s part baroque pop masterpiece and piss-take. It’s vintage Bonzos. The sleeve notes of this album compare them to the lunacy of Frank Zappa’s Mothers of Invention, and rightly so. Eccentric Englishness abounds where Zappa’s sneer lived. To try and convey what this song entails in print is foolhardy at best… rest assured, you need to hear it to believe it.

An easier to swallow track is the fantastic Sun Sing by The Rainbow Ffolly. The track is perfect summer pop with “a lysergic sense of fun” (c/o Record Collector) with double tracked harmonies and phased leads. Reminiscent of The Beatles’ better work and The Pretty Things’ SF Sorrow LP, this track ain’t no dancer, but one that no home should really be without. It sounds for all the world like it should have been a hit. The same can be said for the incredible sounds of The Koobas. The Koobas are one of the most underrated bands of the sixties and listening to Barricades, possibly the strongest track from their eponymous LP, it’s difficult to grasp why they didn’t sell millions of records.

Featured for the first time on CD is the cracking and biting Mr Commuter by Mike Proctor. In what can only be described as a Ray Davies-esque attack on the middle classes, Mr Commuter sees Proctor sneering “Mr Commuter you’re like a computer… you never step out of line…” It’s a little twee, but jesus, there’s a fuzz guitar to die for in this.

As ever, with comps like this, you hear a record that, as soon as it starts, you demand that you own it on seven inch immediately… only to find out its one of the rarest records in the world and you’d have to sell your arse for life in the vain hope of owning it. The track I’m talking about is the staggering pop masterpiece that is World Of You by The Aerovons. I know nothing of this band and nothing of this record apart from what I’m hearing. What I’m hearing is tripped out mellotrons gliding through grand orchestrations, minor key vocals and drums that could bring down a mountain. It’s perfect and worth buying Insane Times for alone. In a similar fashion, World Spinning Sadly by The Parking Lot is another piece of beautiful and haunting psych. (electricroulette.com/2007/09/review—insane.html)