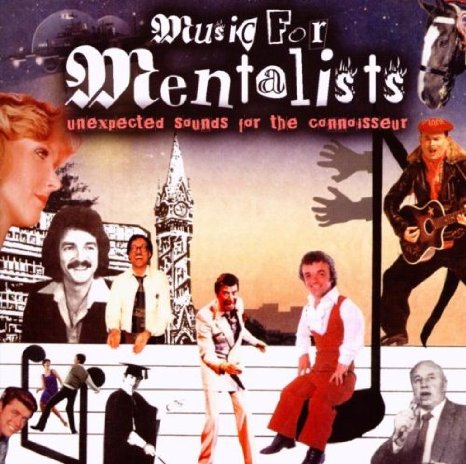 Perhaps the first question should be why? For what warped reason did some misguided record executive think that any of the music contained within this compilation was worth releasing on a commercial basis? Whose twisted vision saw these tracks racing up the charts? In fact, who thought that anybody, apart from those with an equally cracked view of the world, would rush to their local record shop to snap up even one of these bizarre items? But then again, perhaps it doesn’t really matter at all, and we should just be grateful that these skewed slices of strangeness were pressed up and are still to be found lurking in dark corners of dust-shrouded record racks, thrift stores and flea markets. Mick Dillingham has devoted many years of vinyl hunting to unearthing the obscure, the peculiar, and in some cases, the downright disturbing. Here, Psychic Circle is delighted to present a selection of his personal favorites. Thrill to a Yiddish version of “Rock Around The Clock,” groove to a song about aliens landing in Northampton, shimmy to a disco-ball version ofPink Floyd‘s “Arnold Layne,” sit open-mouthed at the lateMichael Elphick‘s deeply worrying paean to kidnap and date-rape (it can’t be, can it?), weep along with the moving tribute to Sefton, the cavalry horse blown up by the IRA. Emotions you never knew you had will be brought to the surface. Will it change your life? Probably not, but it will bring some unusual and welcome color into it. Please join the Psychic Circle label in thanking Mr. Dillingham for his tireless endeavors in seeking out hidden gems that would otherwise have remained undiscovered.