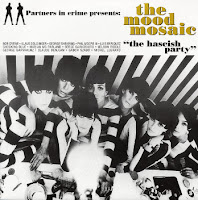 The Mood Mosaic, Volumes 1 to 12, present different aspects of 60’s and 70’s soul jazz, jazz funk, jazz groove and just plain old psychedelic freakout but groovy, tripped out but accessible, and the weird but fun.

This compilation from Italy, the first in a long-running series, presents a collection of easy listening, jazz, and film soundtrack cuts that have a loungeish edge to them. Although it doesn’t flow like a good compilation should, it offers up enough intriguing oddities to satisfy lounge cultists. Subtitled “The Hascisch Party,” this disc divides its time between psychedelic instrumentals drenched in all sorts of trippy sonic effects and subtler, Latin-styled tracks with a jazz feel to them.
In the psychedelic arena, the best moments include “Pygar’s Persecution/The Black Queen’s Beads,” a rare cut by Bob Crewe from the Barbarella soundtrack that pits easy listening horn arrangements against some wild fuzz-guitar solos, and “En Melody,” a Serge Gainsbourg instrumental built on a duel between slashing electric guitar leads and some funky, serpentine basslines.
In the easy listening corner, the top picks are “Lamento,” a breezy Nelson Riddle instrumental that layers breezy strings and light horns over a gentle Latin beat, and George Shearing’s easy-jazz instrumental version of “Aquarius,” which recreates the song’s melody via jazzy piano and vibes against a thick backdrop of Brazilian-styled percussion. Unfortunately, the two extremes never really blend together and this makes for some abrupt shifts in tone that make Mood Mosaic: The Hascisch Party a difficult listening experience.
There are also a few lesser cuts that could have been bypassed; the most annoying is Luis Enriquez’s bizarre version of “Mas Que Nada,” which veers back and forth between a straight rendition of the song and what sounds like drunken gibberish. Despite this problem, most of the cuts on this disc are entertaining and almost all of them are tough to come by. In the end, Mood Mosaic: The Hascisch Party is not an ideal pick for the lounge novice, but offers more than enough rarities to please the seasoned veteran.