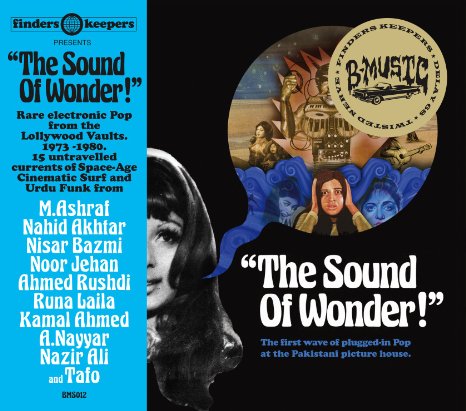 Commonly, ignorantly but understandably lumped in with its wealthy not-too-distant cousin, Bollywood, Lollywood was inspired by, but often overshadowed by its posh and well-traveled relative. Following the simplistic Bombay + Hollywood = Bollywood name game (that would in later years spawn Nollywood in Nigeria), Lollywood’s Lahore based film industry was a profitable and vibrant one that found great success in the modest boundaries of its own country but was seldom savoured outside Pakistan. However, the hugely important musical business spawned a bi-product that was viewed as a potential earner for international entertainment industry, EMI, which allowed talented musicians to create ambitious music with world class mediums at there disposal, which throughout the 60s and 70s ranged from fuzz-guitars, space-echo machines and American and European synthesizers, but, due to the composers indigenous roots, rarely a drum-kit. Here you’ll find fuzzy, scuzzy, twang-happy, spaced-out and funked up urdu-grooves complete with harmonium melodies and driven by some of the most random factor, freakish, finger-numbing, percussion that the South East Asian mainstream has ever had to offer. Above all, Lollywood soundtracks sound RAW! Re-imagine some of the most action packed Bollywood productions (which Lollywooders actively did) then fire the make-up department, take away the special effects budget and then improvise. The lack of gloss on a dusty Pakistani mini-LP makes for truly experimental Eastern Pop music.

So, it’s time to meet the culprits. The names on the back of the records that’ll keep you gambling on Ghazals and taking punts on Pakistani pulp-balladry. As an introduction, in place of R.D. Burman and Asha Bhole, we have Mr. M. Ashraf and his long-term female collaborator, Nahid Akhtar. This duo would provide Pakistan with it’s Gainsbourg / Birkin or it’s Morricone / Dell’Orso for over 20 years, recording squillions of cut-and-paste sonic collages and moog-fuelled desperate love / hate / chase / chill / kill / songs mixing onomatopoeic Urdu lyrics with unexpected bursts of user friendly English language (which often elongates the running time passed the 5 minute mark) and throwing in the odd motif from a Barry White or Donna Summer hit. We also have legends like Noor Jehan, a national treasure and household name in Pakistan whose discography of film songs have deprived the vaults of EMI Pakistan of floor space for half a century. (From the official B-Music press release)

The Sound of Wonder!