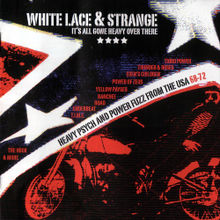 Comprised of rare U.S. stomp-rock from the ’60s you’ve probably never heard before. By the end of the ’60s, psychedelia was pretty much a spent force. Bands were looking for something simpler and more earthy. Crosby, Stills & Nash had gone all acoustic and harmonious, The Band had achieved a return to classic Americana, and James Taylor was showing the world you could be laid back and hip at the same time. However, not everyone wanted to ditch their fuzzboxes. Inspired by such outfits as Cream, Blue Cheer, Hendrix and the nascent Led Zeppelin, these American bands were moving out of psych into something less cosmic and far heavier. This mix of blooze rock and heavy riffing is loud and nasty but it pre-dates metal. It’s pretty tripped-out, but it’s not really psychedelia. It’s the sound of guitar, bass and drums (and the occasional Hammond organ) just as it was meant to be — cranked up and in your face. No frills, just power chords and stomping riffs. Stamp on that Big Muff and solo till your brain drops out. Compiled by Psychic Circle label head, Nick Saloman of The Bevis Frond.