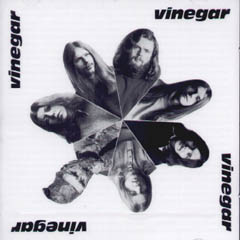 One and only album by German underground band Vinegar originally released in 1971. Musically in style of early Pink Floyd, progressive but very psychedelic, long instrumental tracks but also with female vocalist reminding of Nico. One of the lost treasures from Germany and very sought after!

Recorded on January 9th, 1971 in Studio Rottenburg, Vinegar’s self-titled album was released on LP in a limited edition of 1,000 copies! I’ve read opinions from folks describing Vinegar’s sound as rather Floydian. While this is true, it should be noted that the group sounds much more like a cross between Amon Duul II and Pink Floyd. With that being said, one can easily hear the Floyd influence in the spacey organ, drum fills, slide guitar, and occasional celestial vocals. Likewise, the Amon Düül II influence can be heard in the violin, vocals, and the guitar riffs. Overall, the two styles are combined rather nicely into a sort of progressive-garage-space rock sound. Highlights from the album include ‘Der Kaiser Auf Der Erbse’, ‘Fleisch’, And ‘Sawmill’. ‘Der Kaiser Auf Der Erbse’ begins with a violin solo which reminds me of Edgar Hoffman from Embryo. From there the track switches gears and turns into a rock track with intentionally unintelligible vocals which could be described as Faust-like. Containing a Floydian organ and drum beat, ‘Fleisch’ slowly introduces distorted guitar and bass into the mix before a celestial vocal kicks in and the track begins to take shape in the classically themed “A Saucerful of Secrets” sort of way. Finally, ‘Sawmill’ showcases the bands mixture of Duul and Floyd influence. ‘Sawmill’ starts out as a psychedelic garage rocker with female vocals (reminiscent of Renate Knaup) before taking a spacey turn and sounding like Sysyphus off of Ummagumma. From here the track revives its garage sound before fading out into part 2 which is dominated by an Amon Duul approach. Overall, the album is a satisfying first effort which, sadly, was never followed up due to their break up in late 1971.
(krautrockgroup.com)