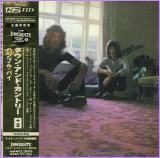 Anyone who thinks of Humble Pie solely in terms of their latter-day boogie rock will be greatly surprised with this, the band's second release, for it is almost entirely acoustic. There is a gently rocking cover of Buddy Holly's "Heartbeat," and a couple of electrified Steve Marriott numbers, but the overall feel is definitely more of the country than the town or city. "The Sad Bag of Shaky Jake" is a typical Marriott country ditty, similar to those he would include almost as a token on each of the subsequent studio albums, and "Every Mother's Son" is structured as a folk tale. On "The Light of Love," Marriott even plays sitar. Peter Frampton's contributions here foreshadow the acoustic-based music he would make as a solo artist a few years later. As a whole, this is a crisp, cleanly recorded, attractive-sounding album, totally atypical of the Humble Pie catalog, but well worth a listen.

No-one packages a CD album quite like the Japanese. Known as a culture for elaborate and excessive packaging, their approach to the CD album is no exception. From the visual delights of the artwork and packaging, to the content itself, you will without doubt get your money's worth here. The inclusion of the famous 'obi-strip' not only adds a uniquely intriguing aspect, but is also a great marketing tool for the Japanese labels. The term 'obi-strip' is derived from the name of the piece of wide fabric - the obi - that a geisha woman wears around her waist over the traditional Kimono dress. An amazing amount of information is packed onto this little wraparound piece of paper, often noting special tracks, concert dates, discography information and release anniversaries. And, as this information is intended to be read in the home market, it’s all printed in Japanese kanji and ~kana script! Whilst they are safely sealed on new release CD’s they are often discarded once opened, so they should be considered a real bonus when intact on out-of-print CD’s.

In recent years we have seen the obi-strip occasionally replaced with a sleeve sticker, no less attractive and equally unique to the Japanese pressing. Japanese CD albums often benefit from extra music and new video-style content, to further entice the Japanese public to buy their native release and not an import. Non-album tracks and exclusive mixes often feature and there are a huge amount of 'Japan-Only' releases that do not have an equivalent release elsewhere in the world. Japanese pressings will nearly always include a lyric booklet or fold-out lyric sheet. These are dual-language, printed in both the ~kana script and in English, the latter often having some wonderful mis-translations!