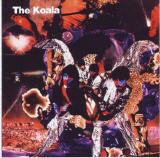 "This notty collection of US garage psychedelia originally appeared in 1968. Though the band was marketed as being from Australia, they were in fact New Yorkers, whose short, sharp songs, snarling guitar and aggressive rhythms anticipate the punk music with which the city would become so associated a few years later. Elsewhere on the album are some decidedly psychedelic flourishes, making it a must-have for all fans of psych-punk."
"The Koala prove themselves to be above average players, full of passion and conviction on their lone album. "Look at the Way She Comes" is typical of the band's best material: a Who/Stones hybrid with bile-inducing vocals, wild psych guitar, and a tight, nearly deranged performance — plus it's a great tune. At first, "Strange Feelings" seems to be teen-punk angst all the way, but features an unexpected yet seamless raga detour (and the only time they would noticeably embrace Indian music). "Poppa Duke Tyler" borrows both the melody and subject manner of "Eleanor Rigby," but instead of going the somber route the Beatles took, Koala uses the universal theme of loneliness to produce a stomping, unhinged rocker — complete with fuzz-tastic guitar solo from Louis Cane — where the protagonist is actually driven to the brink of madness by the isolation. Like many garage vocalists from the mid- to late '60s, singer Jose Mala's super-snotty, Jagger-like snarl foreshadows punk, but Mala has so much New York attitude and an obvious dedication that he should stand with his peers as one of the most affective vocalists of the era. In fact, it's the whole group's commitment to the material that makes it stand out from other lost garage-psych acts from the time. Their energy and enthusiasm is so infectious, with arrangements that are subtle, yet manic and appealing, it makes up for the handful of unremarkable numbers here. Drummer Joe Alexander and bassist Anthony Wesley are a competent rhythm section that manages to hold it all together even while flailing about; Cane's hyper lead guitar work is spot-on throughout; and the songs of Mala and rhythm guitarist Joey Guido are fine to fantastic tales of lost souls, wrecked relationships, and fading childhood. Truly one of misplaced gems of '60s garage pysch-punk.

New York-based band that released just one album, which was ignored at the time, but decades later became highly sought-after by collectors of obscure garage pysch. The unit was discovered by the Blues Magoos' producers/managers, Bob Wyld and Art Polhemus, who would secure the act a contract with Capital Records. The label decided to market the group as Australian, a marketing gimmick that seemed to have worked for another New York group, the Strangeloves (who hit the Top 40 in 1965 with "I Want Candy"). They released their first and only single, "Don't You Know What I Mean?" b/w "Scattered Children's Toys," in 1968. Though it didn't receive any chart action, the band did proceed with recording their debut LP. Produced by Wyld and Polhemus, their self-titled record was issued the following year. The Koala mixes the Who's frantic rhythms and Stones-style garage rock with riotous psych leads and venomous, proto-punk vocals. An impressive introduction, but the unit decided to call it a day soon after their album was made available and the record disappeared without much notice. It was rediscovered in the 1990s, with original LPs selling for high prices to fans of long-lost, high-energy garage psych-punk. It was eventually reissued on CD by the Fallout label in 2006."