Fairytales Can Come True: UK Popsike from the Late

Journey To Thyme: 80 Of The Rarest 60s Garage Trac 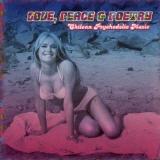 The Love, Peace & Poetry series from QDK continues in Chile, with 17 tracks culled from some of the lost treasures of the psychedelic music scene of the 7-year period between 1967-1973. In 1973, the Chilean dictatorship banned most rock bands and most musicians had to stop or leave the country, or take it underground. The ban extended to the retroactive destruction of many master tapes for many of the albums included here, which only just stopped as recently as the 1980s. Kissing Spell represents with "Yellow Moon" taken from their 1970 album Los Pajaros, as well as Embrujo who released their self-titled LP in 1971. Los Jaivas' debut LP was pressed privately in 1971 in a small edition of 500 copies, making this track extra-rare.