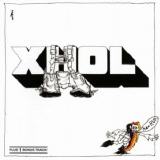 This album contains three improvised songs beyond the 20 minute mark. The first two were recorded live in Göttingen/Germany at the beginning of July 1970 and the last studio one, which only appears on the GOD compact disc reissue, is a little surprise because produced four years later which was two years after the official breakup of the band!

XHOL originally wanted to make a double LP as a studio and live split but the OHR label, headed by R. U. Kaiser, didn't agree and enforced a regular live production. So the members, a little bit angry about that, provided this album with the encrypted name 'Hau-RUK'. RUK stands for Kaiser's initials and 'Hau' is a german synonym corresponding to 'beat'.

'Haste einen Freund dann rauch mit ihm den Scheund' is printed on the album back side which can be figuratively translated to 'If you have a friend you should smoke a joint with him'. And that points to the essence of this spaced out recordings. Here we have simply structured jazz rock oriented jams in the absence of electric guitar but with diverse keyboard and brass contributions. If the listener does not lose his patience and is able to get used to the special meditative style of the band - only cut off by some explosive parts here and there - all obstacles are cleared further on.

Breit needs time to get involved with - a short name but a long meandering track and probably a description for the current condition of the band and the audience at this evening. The song rises slowly from minute to minute with canterbury leanings near to Soft Machine. The band members are interacting awfully good with a strange weird organ and wah-wah deformed saxophone. Schaukel - another german song name with a strange intellectual challenge - works nearly in the same way with more bluesy components including a reminiscence to the classic 'Rock me Baby' and it would be no problem to join the songs to one title.

Süden Twi Westen was recorded at the famous Dierks Studios on the other hand and looks like to be a result of a XHOL reunion which finally had not been completed. Norbert Dömling and Hansi Fischer, only contributing to this bonus track, are wellknown for me because they also played with Missus Beastly and Embryo. This song differs to the latter for some reasons - stylistically in the earlier XHOL CARAVAN mood, with a better sound quality and more elaborated and gripping. The band delivers a swinging jazzy begin with flute/saxophone and electric piano interrupted by experimental keyboard and flute contributions, later continuing in a more groovy mood and finally coming back to a very jazzy sound.

The original vinyl version of 'Hau-RUK' is a little bit unvaried according to my taste but the Garden Of Delights reissue, gentrified with the bonus track, is highly recommended though - interesting for fans who like to hear escalating jams with jazz rock orientation.
progarchives.com