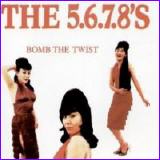 The 5.6.7.8's formed when Sachiko and Yoshiko "Ronnie" Fujiyama, two sisters from Tokyo who both shared a passion for rock and roll, founded the band in 1986 with two other members. Originally, the lineup consisted of Yoshiko on vocals and guitar, "Rico" on second guitar, "Yoshie" on bass guitar and Sachiko on drums. After several line-up changes (including the bassist Yoshiko Yamaguchi, who was the bassist featured in the Kill Bill movie), the band eventually became a threesome after Rico and Yoshie's departures. Yoshiko and Sachiko are still the main components in the band, and now Akiko Omo has rejoined the band as the bass guitarist (She originally joined the 5.6.7.8's in the early 1990s).

Even though the group mostly sing their songs in Japanese, they do many covers on American rock and roll records from the 1950s to the 1980s. However, their official website and most of their fansites and fanclubs are in Japanese, as they have the biggest following in Japan and have done countless performances in their home country.

Yoshiko, who plays a Teisco guitar and sports a "Teenage Queen Delinquent" tattoo on her upper right arm, was initially the lead vocalist, but as the band performed more rock and roll songs originally performed by female groups, every member had equal parts in vocals and many songs are performed singing simultaneously. 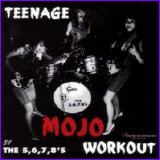 The 5.6.7.8's became known in the West after their appearance in Kill Bill Vol. 1, in which they performed "I Walk Like Jayne Mansfield", "I'm Blue" (a cover of The Ikettes' song) and "Woo Hoo" in a Tokyo club, "The House Of Blue Leaves". On the Special Bonus Features of the Kill Bill Volume 1 DVD, one of the specials featured a live performance which shows the 5.6.7.8's singing "I Walk Like Jayne Mansfield" and "I'm Blue" during filming of the movie. The 5.6.7.8's song "The Barracuda" is featured in The Fast and the Furious: Tokyo Drift soundtrack.

According to Kill Bill's director Quentin Tarantino, he discovered the music of the 5.6.7.8's after hearing it in an urban clothing store in Tokyo, hours before going to the airport. Tarantino asked if he could purchase the CD from the store, as he had no time to go to a music shop. When the store clerk on duty said no, as the manager was not present at the time, Tarantino offered double the retail price of the CD and acquired it.

They also became renowned for the use of their cover of The Rock-A-Teens song, "Woo Hoo", in advertisements for Carling lager and Vonage VoIP service in 2004. The song reached #28 on the UK Singles Chart in 2004.[2] The follow-up song was "I'm Blue", but it peaked at #71 on the same chart two months later.

The 5.6.7.8's have also toured in numerous countries including China, Australia, the United States, and their native Japan. ~ Wikipedia