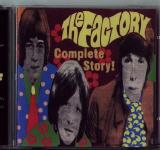 Originally known as The Souvenir Badge Factory, this band's two 45s are classic slices of British psychedelia. They scored a deal, when studio engineer Brian Carroll met 17 year old Ian Oates at a party. Path Through A Forest, their first recording, started life as an acoustic folk demo, by an unknown writer and is unusual for its distorted vocals and great guitar. In fact, the band had intended to include a barrage of weird sound effects on the single, in a similar manner to Pink Floyd, but the 'suits' at the time said no.

On their second 45, Try A Little Sunshine the vocals are more poppy and it again features some great guitar work, but with it's suggestive lyrics ('Sunshine' was slang for L.S.D.) resulted in a BBC ban, and like it's predecesor it failed to happen commercially. Both 45s are now very sought-after by collectors of psychedelia and you can expect to pay in excess of £100 for either. Gone, the flip to their first 45, was a cover of a track from a Paul Revere and The Raiders album. Both sides of their second 45 were written by studio engineer John Pantry.

Try A Little Sunshine can also be heard on Perfumed Garden, Vol. 1 (LP & CD) and Electric Sugar Cube Flashbacks, Vol. 4 (LP) compilations and Path Through A Forest has resurfaced on Chocolate Soup For Diabetics, Vol. 3 (LP), Chocolate Soup (CD), Beat It (3-CD) and Artefacts From The Psychedelic Dungeon (CD). There's also a demo version of Red Chalk Hill on the CD compilation Circus Days, Vol. 6, although according to Brian Carroll, this was written and perfromed by John Pantry without the involvement of the band. Other compilation appearances have included:- Try A Little Sunshine and Red Chalk Hill on The Upside Down World Of John Pantry (LP); Path Through The Forest (two versions), Gone, Mr. Lacey, Try A Little Sunshine, Red Chalk Hill, Second Generation Woman on Hard Up Heroes, Vol. 6 (CD).

Both sides of the MGM and CBS 45s can also be heard on a mini-CD Path Through The Forest along with rare demo versions of Fairport Convention's Mr. Lacey and Family's Second Generation Woman. All of these tracks, plus a re-creation of the Path Through The Forest with the original sound effects added back in, can also be heard on The Complete Recordings (Heads Together HT 0) 1996.