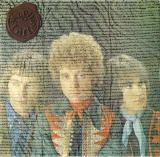 "MAGNA CARTA is an English 'folk' band, formed in 1969 in London by Chris Simpson, Lyell Tranter, and Glen Stuart. They were part of the early progressive wave, but without really fully stepping into the progressive realm. Magna Carta's music is largely inspired and influenced by the folk of Simon & Garfunkel, focussing on soft and gentle acoustic music, often with a traditional feel, augmented with orchestral arangements and good vocal harmonies. Influences and similar artist include the already mentioned Simon & garfunkel, Fairport Convention, Kevin Ayers, Moody Blues, Amazing Blondel, Caravan, Al Stewart, the softer folk/singer songwriter genre and Canterbury genre.

MAGNA CARTA has gone through numerous personel changes over the years, with the only constant factor being Chris Simpson. Most notable members include Glen Stuart, an amazing vocalist with a great range, Lyell Tranter, who soon departed for Australia to be replaced by Davey johnstone on guitars (left Magna Carta to join Elton John as long time band member), and Linda Taylor who would later merry Chris Simpson.

Between 1969 and 1975 MAGNA CARTA made some wonderfull albums, with the beautifull "Seasons' and 'Lord Of The Ages' as absolute highlights. Also the live album "In Concert" recorded in 1971 in Amsterdam is not to be missed. With the leaving of Glen Stuart the magical beauty was lost, and for a while the band seemed to fall apart. Chris Simpson however managed to keep the band alive and MAGNA CARTA continoud making nice highly enjoyable music.

In 1983 Chris met Linda Taylor and they continued mostly as a duo keeping the MAGNA CARTA name alive. Studio albums became rare, but rereleases of studio albums, and new live recordings kept them performing throughout Europe until today (2006)."