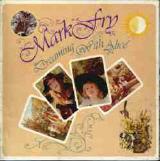 Tracklist:
This album was originally recorded in Italy and England during 1972 by an almost unknown artist who is now a mystery. The album was only ever released in Italy and was almost entirely unknown in the UK and elsewhere around the world. Like many albums after a limited release it receded to a forgotten back page of musical history. It was in the late 1990s that Akarma Records in Italy reissued the album on CD with the original sleeve on the evocative cover.

When we read of an album being labeled 'psychedelic folk' it is often a dubious use of the term and a listener may be at a loss to find the elusive element of psychedelia. However there can be no such doubt with regard to this album which is a defining masterpiece of the style.

From the cover it is clear that this album seeks to fuse the whimsical text and graphics with a deep sense of the rural and with the tarot styled cards elements of folk low magic are also implied. The back cover shows some kind of pagan princess or holy woman in a trance like state and inside we see a young woman asleep. With such an evocative cover the scene is set for something special and for once here is an album that lives up to it's fusion of the surreal, rural and magical.

The whole album seems to be about sharing some kind of surreal psychedelic dream with Alice from the Alice Through The Looking Glass book. This book had like the nonsense wordplay of Lear been a defining influence on British psychedelic culture, linking the new mental expansion with a quaint gentle surreal element. Throughout the album minute long miniature songs explore these dreams and visions carrying on the 'Dreaming With Alice' theme and eventually submerging it in echo, fuzzed wah wah guitar and backwards tapes. From the first version of this onwards we immediately experience something strange, a little one verse song with just acoustic guitar and heavily processed, echoed vocals that seem distant, removed and emotionally disconnected. The first lyrics we hear start as it then continues.

"Did you pass the glass mountain?
Where Salome opened her dress.
Did you see the dolphins feathered fountain?
Oh the King made a bloody mess"

Disconnected and remote it may be but it is also warm and enveloping, a hazy opiate lullaby. It is then quickly on to 'The Witch' weaving guitar with pulsing eastern percussion and sitar topped by flute and the vocals which carry on the heavy processing. This is a darker song which seeks the Witch to cure his loneliness by coming through the window, the sound is heavily psychedelic and gives way to a beautiful ballad which is followed by the innocent childlike 'Roses for Columbus', a song s delicate it almost seems an effort to sing it and considers the discovery of America. Next is 'A Norman Solider' which seems beamed from the twelve century and provides a picture of a fog filled landscape, the solider half seen through grey light. By now the 'Dreaming With Alice' interludes are becoming ever stranger as some kind of inexplicable narrative develops with Cleopatra eating Christmas cake and asking to be called Pyramid Prostitute, however the words are almost beyond meaning becoming a soft tapestry over the soothing music which has you similarly drifting mentally. 'Lute and Flute' is baroque medieval folk that is quite exquisite and similar to Amazing Blondel.

'Down Narrow Streets' roots us back in some kind of memory from the singer's past, it is very moving yet cannot be placed. The guitars weave around each other in layers, the vocals shimmer and glide across the music, as though trying to remember the distant, hazy recesses of childhood. From here we enter the psychedelic epic of 'Mandolin Man' which clearly is meant to be the singer and even has this in the title. This starts as a driving primitive folk rhythm with a fantastic riff, if this had been earlier I'm certain it would have inspired a Jimmy Page adaptation.

'Oh Mystery man, where are you going?
I can see, your eyes are snowing'

The guitar probes and pushes with a circular riff and blues slide soloing over the top, a heavy deep drum beat comes it and it evolves to take in seething wah wah guitar with banks of hugely processes vocals like a heavenly choir, the soloing becomes more frenetic and it achieves a deep heavy folk sound that few have ever achieved.

The final version of 'Dreaming With Alice' is so heavily processed, so 'gone' that the lyrics are all but indecipherable and we end as we began, in thrall to Alice and her entrancing dream.

Reference points for the album are hard as it is truly unique. Donovan was often as surreal but never as distant, Nick Drake explored acoustic music in a similar way but to far different more personal effect, artists like Steve Tilston were never as extreme. Perhaps it is closest to the modern generation, to such as In Gowan Ring' who merge the psychedelic with a focused distant quality, or Fit and Limo with their genuine sitar folk sound, or Stone Breath with their mystical evocations that beguile and scare in equal parts, or Drekka with their low-fi rumbling darkness. However none are truly close and that is because the artist here is not giving us his personal feelings but connects on a deep more sub-conscious level, with our innate feelings, with the part of ourselves we cannot reach. Whether by drugs, religion or music that was the purpose of psychedelia, to connect with that we cannot grasp in ourselves except through the shortest glimpses of forgotten child hood. In this it provides a defining album that not only in sound, but in it's quest attempts to connect the broken synapses of memory. Inevitably by the end the processing of the music is so extreme that the fragile connection is lost, we cannot find these places in ourselves except in the fragmented transitory illusions of sleep when we once again dream with Alice. (theunbrokencircle.co.uk)