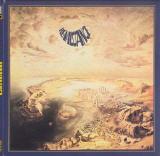 "The first Renaissance album features what today would be considered almost a legendary lineup at its core. At the time of the Yardbirds split in mid-'68, Jimmy Page walked away with the blues and hard rock side of the band, plus whatever heavy metal influences they'd ever manifested, while lead singer Keith Relf and drummer Jim McCarty -- who'd represented the more folk-oriented, creative side of the old band in earlier years, and their trippier, spacier side in more recent times -- decided to get experimental in those directions, initially under the name Together as a duo, and then forming an entirely new group. Ex-Herd/Jimmy Powell & the Dimensions alumnus Louis Cennamo joined on bass and John Hawken, late of the Nashville Teens, came in on piano, with Relf picking up the guitar as well as singing, and his younger sister Jane Relf sharing the vocals.
The resulting group, working from Relf and McCarty's compositions, proved greater than the seeming sum of its parts as Hawken and Cennamo quickly began expanding on the basic songs, developing their own classical-style cadenzas -- at the time, in 1969, there was just enough adventurousness left from the psychedelic era to hold their audience to what they were doing, even as a new art rock audience began coalescing. The resulting album is a strange mix of psychedelic, classical, folk, and jazz elements -- "Kings and Queens" has elements of freakbeat and art rock, steeped in a musical romanticism (complete with a rippling Hawken piano solo, and some of McCarty's best drumming ever, as well) in between a pounding opening and closing section. In contrast to a lot of the art rock groups that followed, however, the music here is still very much the work of a rock band -- there's a lean texture to the playing that tells you this was a performing ensemble that was used to working clubs, with Relf turning up his amp on occasion to get a nice crunchy sound on his guitar and lending his instrument to the classical-style cadenzas on pieces such as "Innocence"; Jane Relf's crystal pure, soaring alto added a hauntingly beautiful element that was unusual in rock at the time." ~ Bruce Eder, All Music Guide

Biography
The history of Renaissance is essentially the history of two separate groups, rather similar to the two phases of the Moody Blues or the Drifters. The original group was founded in 1969 by ex-Yardbirds members Keith Relf and Jim McCarty as a sort of progressive folk-rock band, who recorded two albums (of which only the first, self-titled LP came out in America, on Elektra Records) but never quite made it, despite some success on England's campus circuit.

The band went through several membership changes, with Relf and his sister Jane (who later fronted the very Renaissance-like Illusion) exiting and McCarty all but gone after 1971. The new lineup formed around the core of bassist Jon Camp, keyboard player John Tout, and Terry Sullivan on drums, with Annie Haslam, an aspiring singer with operatic training and a three-octave range.

Their first album in this incarnation, Prologue, released in 1972, was considerably more ambitious than the original band's work, with extended instrumental passages and soaring vocals by Haslam. Their breakthrough came with their next record, Ashes Are Burning, issued in 1973, which introduced guitarist Micheal Dunford to the lineup and featured some searing electric licks by guest axeman Andy Powell. Their next record, Turn of the Cards, released by Sire Records, had a much more ornate songwriting style and was awash in lyrics that alternated between the topical and the mystical.

The group's ambitions, by now, were growing faster than its audience, which was concentrated on America's East Coast, especially in New York and Philadelphia -- Scheherazade (1975) was built around a 20-minute extended suite for rock group and orchestra that dazzled the fans but made no new converts. A live album recorded at a New York concert date reprised their earlier material, including the "Scheherazade" suite, but covered little new ground and showed the group in a somewhat lethargic manner. The band's next two albums, Novella and A Song for All Seasons, failed to find new listeners, and as the 1970s closed out, the group was running headlong into the punk and new wave booms that made them seem increasingly anachronistic and doomed to cult status.
Their '80s albums were released with less than global or even national fanfare, and the group split up in the early '80s amid reported personality conflicts between members. During 1995, however, both Haslam and Dunford made attempts to revive the Renaissance name in different incarnations, and Jane Relf and the other surviving members of the original band were reportedly planning to launch their own Renaissance revival which, if nothing else, may keep the courts and some trademark attorneys busy for a little while. ~ Bruce Eder, All Music Guide