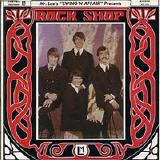 From Monterey, California. A very rare album of fuzz guitar-led blues and pop rock. It has a very funny cover depicting the group as the next Beatles and hairdresser-cum-rock promoter "Mr. Lee" as God!

According to Tony Sanchez in the liner notes to Fuzz, Flaykes, And Shakes, Vol. 4 (LP & CD), the above 45, both sides of which appear on the comp, is by a different band to the one who recorded the LP - can anyone confirm this? Is That Your Halo is an intensely menacing punker that rumbles into Yardbirds' rave-up territory at the bridge where incendiary leads battle with rasping harmonica; State Of Your Mind is an almost equally powerful acid-punker - truly a double-whammy of a 45.