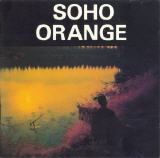 "Recorded in 1971 at the same Scottish studio that gave us albums by the slightly better-known groups Tentacle and Bodkin, this never had a release. The tapes were found in the late 80’s, one story says they were found in a shed!

Released in 1991 on the same German label that gave us the first German Oak album, this is some very good early 70’s hard rock somewhat in the Budgie vein though much sludgier. Unfortunately not much seems to be known about this group - I have had no luck finding a listing of the musicians, or any info that is not on the back cover. One track is over 10 minutes, the other five clock in around 5 to 6 minutes. Anyway, not the greatest album ever made, but an obscure gem that will appeal to most lovers of early 70’s rock."