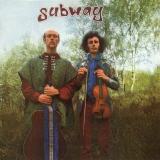 Subway was a duo, consisting of an American and an UK-guy, who released their only album in France as 200 vinyls in 1972. There they lived and played both for some time as street musicians, who played their compositions even at Parisian subway, hence the bandname. Unfortunately the album fell through, so the unsold vinyls were melted, as usual in France at this time.The band presented a phantastic psych-folk music with prog-rock-elements. An absolutely top-album, which hopefully now will reach a bigger audience, as the original LP is very rare. Fully remastered sound for this great studio production. This first ever CD reissue is made under license of the musicians."

A truly odd and almost indescribably strange record (now on CD for the first time ever) from the annals of European prog circa 1972. subway were a half American, half British duo, living in France (see what I mean? It’s nonsense already) who released 200 copies of this, their self titled album, on vinyl, and promptly disappeared without trace. Their sole 'gigging' consisted of busking in Paris subways- hence the band's name- and to add to the legend, it seems that most of the unsold copies were melted, which was usual French practice!! The music itself is dark, psychedelically inclined folk with elements of freeform prog: somewhere betwixt Comus and the West Coast Pop Art Experimental Band, but with less instruments.Jewelcase version with slipcase.
-----------------------------------------------------------------------------------
When American Born singer/songwriter Irvin Mowrey came in London in the early 70's "to check the scene out", he ended up playing in the subway to raise his rent, and soon met a classically-trained local violinist named Malcolm Watson, fresh from concerts in Abidjan (Ivory Coast) with a trio. They jammed in the subway and started adapting Mowrey's songs to a duo format. The duo's sound was rather unusual, mixing an acoustic eerie violin with a 12-string guitar, mixed with a great voice and intriguing lyrics. They returned to the subway to play out the three songs and a radio-producer walked by and proposed them a live appearance on the radio. After that, the duo went to the Borders (next to Scotland) for a week and turned up with over 90 minutes worth of material, worked from existing songs from Mowrey.

Visa problems made that Mowrey had to leave England for France (Daevid Allen anyone?) and headed for Paris, finding an open stage show and clinching a gig two weeks later. Calling Watson to the rescue, the duo practiced in the Paris subway (Watson making more cash by playing classical music interludes between the duo's repertoire), and wouldn't you know it, a record producer walked by and immediately offered to record them in one of Paris's best studios. The duo then naturally called themselves Subway and after recording toured with Supertramp and Bahendel and a few radio shows before disappearing, later briefly resurging as Busker.

Released in 72 on the Epic label with only 200 copies pressed, it seems that most were destroyed once the unsold copies were returned to the label. This made Subway's only record one of acid-folk's most sought-after rarity.