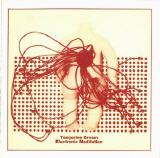 The very first Tangerine Dream album, with what is practically a holy trinity of Krautrock for a line-up. Edgar Froese, of course, for all intents and purposes is Tangerine Dream. Klaus Schulze would go on to Ash Ra Tempel with Manual Gottsching, before departing that band to start a high profile solo career as a pioneering synthesizer composer. Conrad Schnitzler went on to form the first edition of Cluster with Dieter Moebius and Hans-Joachim Roedelius (called 'Kluster' ), before also leaving for a solo career. To my knowledge, his current status is as a sort of underground, cult Krautrock icon. Electronic Meditation is basically a rehearsal jam recorded to Revox in October 1969, still quite a distance away from the sequencer synthesizer compositions that came into full prominence with Phaedra.
Each track on this debut exudes an amorphous, primal, and chilly atmosphere, with no particular destination in mind. "Genesis" makes you feel as if you were viewing a primitive vista back when the dinosaurs roamed the earth: Schniztler's scraping low cello lines and flute, and the gradual emergence of Schulze's tribal drumming. Unfortunately, just as the piece goes from static to moving, it is unceremoniously cut-off with the next track, "Journey through a Burning Brain." The prelude of this one is dominated by stochastic guitar slides and cathedral-like organ, before the rest of the band comes in with a psychedelic jam typical of the time period. On "Cold Smoke" and another psychedelic jam "Ashes to Ashes," Froese unloads with some unhinged, Hendrix-envying blues riffing on electric. This maneuver sounds lacking to me, without the right amount of technique and finger dexterity to propel it. The album closes with "Resurrection," featuring backward vocals and the return of the Church-like Hammond that should make fans of Jocelyn Pook's "Masked Ball" in Stanley Kubrick's Eyed Wide Shut rejoice.

Though I didn't care for it on first listen, this one has grown on me somewhat over the years, as I have attained a greater appreciation for the band's incredible sense of dynamics and the pure abstraction of the music. Overall, however, I still don't think it will ever fully be my cup of tea. Their next album, Alpha Centauri, I think is a better representation of this early era of the band. It is remarkably consistent with this debut despite Schulze and Schnitzler's exits and two new band members come aboard. For those of you out there who really love the early psychedelic days of Pink Floyd at their most experimental and roughly-edged, you definitely need this one in your collection as well.