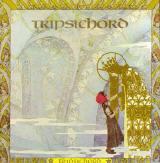 Tripsichord Music Box, whose shortened name Tripsichord is sometimes used, came from San Francisco. Even though their album was released in 1971, late for the fast paced 1966-1968 period of San Francisco psychedlia, it is still considered an equal to the best and most brilliantly adept albums from the acid rock movement—a Bay area music specialty based upon distorted (crazy) guitars. Probably formed in 1968 by five relatively fresh musicians, the group had a very classic rock line-up: Randy Gordon on the drums, Frank Straight on guitar, Dave Zandonatti on bass, Oliver Mckinney on keyboards (organ), and B. Carr on vocals. Our five acid rockers quickly assembled a repertoire of original songs, thanks for the most part to the talents of Dave Zandonatti and B. Carr. This doesn’t mean for certain that, in the first part of their career, there weren’t some personnel changes. In any case, in 1969 they were taken under the wing of Matthew Katz. Manager, producer, and the founder and operator of the San Francisco Sound label, Katz was a know Haight Ashbury character, having participated in a good number of music ventures since that day in March 1965 where, with singer Marty Balin (founder of Jefferson Airplane) he purchased the bar “the Honey Bucket”. Situated on Fillmore Street in the Marina district, it was remodeled and redecorated and would become the well-known music club the Matrix. Matthew Katz would, as a result, become the first manager/producer of Jefferson Airplane. Whatever criticisms one could lobby against Katz’s methods of band management, it is undeniable that he often knew how to take full advantage of intuition and taste. Thus, in 1966, he took over the business end of the still fledgling Moby Grape. Then in 1968, he allowed It's a Beautiful Day to press a single and release an LP on his own label before they signed with Columbia.

It was San Francisco Sound that released the first recording of Tripsichord Music Box—the single “Times and Seasons”/“Sunday the Third” (San Francisco Sound 115). The resulting sound was certainly unique, but the LP format was too restrictive in its length to allow the band to express the entirety of their talents. And if these two titles did possess rare qualities, particularly on “Sunday the Third”, they were hardly original and didn’t stand out against the masses of music produced in1969. It was also at this time that Matthew Katz concocted the idea to release a compilation—one that was destined to lift up his young protégés. Titled “San Francisco Sound”, the compilation was released on the mysterious label Fifth Pipe Dream (F.P.D. 11680) and brought together tracks from It’s a Beautiful Day ("Bulgaria" and the imaginative and unedited "Aquarian Dream", the two sides of their first single), Black Swan (a rather ordinary pop group—the weakest of the four), Indian Puddin Pipes (the formidable "Hashish" and "Water and Wine") and of course Tripsichord Music Box. Tripsichord contributed three songs: "You’re the Woman", "It’s Not Good" (these two songs are actually one), and "Family Song". By far the longest tracks on the album, they are superb, and even though the vocals are themselves excellent, it is above all the explosive and burning guitar and organ solos, and the high-tension melodies that keep our attention. The perfect illustration of acid rock at its highest level, these three tunes that are found nowhere else have been added, on this CD, to the nine songs from the original Tripsichord album—providing a more complete look into what was Tripsichord Music Box.

The product of a collaboration between San Francisco Sound and Janus Records (between Katz and Bob Scerbo), Tripsichord Music Box (Janus J.L.S. 3016), was released two years later in 1971. The album cover was particularly beautiful and symbolic. Done in the style of Gustave Klimt and 1920s illustrators, it evokes the surreal, magical and dreamlike atmosphere of fairy tales, and prepares us for the marvelous voyages (trips) of acid rock. As you are able to discover, the content is at the top of its game, and if certain songs like “We Have died” or “Son of the Morning” remind us of Moby Grape (melodies, vocals and bright sounds), the complete record offers spurts of explosive and deafening guitars, beautiful melodies and remarkable energy. The album doesn’t have a single weak spot, and each song, in its proper place, can inspire happiness. For my part, I must confess a preference for the elevated cavalcades that are “On the Last Ride”, “New World”, “Short Order” and especially “Fly Baby” (a high point in the guitar fret board trip of San Francisco art). A beautiful work that must be a part of your record collection, and listened to often, very often, to once again feel the pleasure, the emotion and the lyricism of these cosmic dreams, already nostalgic from a lost paradise.