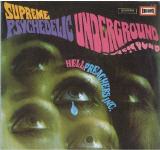 "A big classic from the psychedelic era, the SUPREME PSYCHEDELIC UNDERGROUND exploitation album is said to have been recorded by DEEP PURPLE, which band members Jon Lord, Ritchie Blackmore and Ian Paice have always denied. In any case, this sounds more PURPLE than Lord & Co. themselves! Very close to the sound of SHADES OF DEEP PURPLE, it contains some great Hammond works, guitar pirotecnics with loads of wah wah and distortion and psychedelic vocals. The whole album is a sonic blast that will appeal to fans of Deep Purple, psychedelic hipsters and of course general collectors and afficionados." - Wah Wah.

It was rumoured that this budget album was made by Ritchie Blackmore (gtr). Jon Lord (keyb'ds) and Ian Paice (drms) in their pre-Deep Purple days, but all three have previously denied this. This predominantly instrumental album does feature some good discordant guitar work, notably on Spy In Space, but it's best moment is probably the Bo Diddley derivative Turn Turn.' - The Tapestry Of Delights