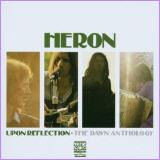 Heron - Upon Reflection - The Dawn Anthology (2006

Excellent double CD set with fully informative booklet by the legendary Prog-Folkies Heron who's sound sat somewhere between between The Incredible Stringband and early Lindisfarne.This excellent outfit from Berkshire (UK) famously recorded their albums in a field (two different fields).This compilation rounds up everything they recorded for the Dawn label between 1970-72 including 5 previously unreleased tracks.Fully detailed fold out booklet rounds off the package.

Heron's self-titled debut LP was mild, drummerless British folk-rock with the rural/pastoral feel common to many early-'70s records in the style. That pastoral feel, in this particular case, might have been in part deliberate; the record was actually recorded in a field by the River Thames, and though the sound quality is very good, you can occasionally hear some birds and faint ambient outdoor noises. The music is very friendly, acoustic guitar-based stuff that, as improbable as such a blend may seem, is a little like a combination of Simon & Garfunkel with the Incredible String Band, though there aren't many of the weirder elements of the latter. You might also cite the most acoustic and folky Paul McCartney ballads of the late '60s and early '70s (à la "Blackbird") and the harmonies of Crosby, Stills & Nash as less prominent influences. Some organ, piano, and accordion add a little depth to what's essentially an acoustic folk base. In common with a lot of records with obvious points of comparison to famous acts, however, the songs themselves aren't nearly as distinguished as those of the artists mentioned earlier in this review. That doesn't mean it's without its pluses, however. It's a fresh and youthful, if naïve, effort, with "Upon Reflection" being both the most memorable track and the one that is most reminiscent of early Simon & Garfunkel.

I cant believe how good this album is - imagine if in the summer 1970 Simon and Garfunkel, the Beatles and Crowded House (no kidding) got together and recorded a hazy summer filled acoustic album in a field complete with heavenly vocal harmonics and real background bird song and field sounds - this album is that and more. You will NOT be dissapointed, a true gem of a find, how this band didn't end up massive is a true mistery to me. I'll pout money on it being your new fave album within 10 minutes of listening.

Wow, what a lot to take in, an album, an ep and a double album along with previously unreleased tracks. I am still exploring, it's only been a couple of weeks since I first heard this collection. I was attracted to Heron by some intriguing reviews, by their insistence on recording out in meadows, and by a love of a wide variety of English artists delving into the pastoral.

The first disc opens with their first album "Heron", this is the recording that defines them and best captures what made them unique. Retaining birdsong and breeze in the background between tracks is very nice. The songs themselves are drifty, mellow and folky in a singer-songwriter folky sense, as opposed to being steeped in the tradition like Trees, Fairport etc. The frequent mention of rivers, waterfalls, meadows and trees in the lyrics evoke an idyllic English countryside that would perhaps peeve some actual country residents, but it's nice all the same. Some of the songs feel like watercolour paintings in a way. Highlights include "Lord And Master" and "For You", both of which feature uncredited female backing vocals that add a lovely touch.

"Heron" is followed by two tracks from the same sessions, the full-length "Harlequin 2" is great, but better still is "Rosalind", to my thinking a finer track than many that were chosen at the time for the album. Most of the remaining tracks on disc one and disc two feature a more robust ensemble, their sound often boosted by drums and bass to the point that their meadows seem forgotten and they sound, well, talented but less distinctive. This sense is intensified by various "indoor-sounding" instruments being more to the fore, such as piano.

"Winter Harlequin" is one track on disc two that sets back into the mood of the first album, and happily it is also the longest track on the collection, with beautiful delicate extended instrumental passages. It's the track, to my thinking, that best lives up to what is otherwise a misnomer, the description of Heron as "legendary prog-folkies", mentioned in the cd notes. Be advised that there are far more tracks that bear no resemblance to prog at all, Heron having quite eclectic taste, such as in the straight-up cover of "You Really Got A Hold On Me". For the most-part I'm hearing strong Beatles influences, the likes of "Blackbird" and "Mother Nature's Son" come to mind often, and also post-Beatles George Harrison, and Wings at their mellowest. The similarity between the lead singer and Paul McCartney in tone and delivery is striking at times on disc two. Sometimes the likeness gets a bit distracting. Elsewhere, there is something of a Simon And Garfunkel sound, whilst "Bye And Bye" has Van Morrison written all over it. "River Of Fortune" is perhaps the song that most resembles another band mentioned on the sleeve as an influence, Incredible String Band, but in general Heron don't exhibit much of the endearing strangeness of ISB.

On disc two highlights for me include "Love 13 (Lone)" and "Minstrel And A King", alongside "Winter Harlequin". The band themselves say that "Twice As Nice And Half The Price" should really have been edited down to a strong single disc album in its day, and I agree with that. In my opinion the cover versions should have been the first to get the chop, so that the focus could be kept upon the band itself, and their own songs. The first time I listened to "John Brown" I was struck by the gratingly clumsy lyrics that did no justice to the heavy subject-matter being tackled, and I was surprised to discover it was written by Bob Dylan!

Anyway, I like this collection, it captures a laid-back, happy vibe, perfect for slowing down with.


Castle 2006, 2 CDs, 68 + 76 minutes (complete metadata)
The double CD gathers together the band's two albums for the Dawn label in the early seventies, plus a maxi single and previous unreleased material.
THE GROUP: Tony Pook (vocals), Roy Apps (guitar, vocals),
Gerald Moore (guitar, mandolin, vocals) and Steve Jones (keyboards).
The two albums were recorded in the fields, with the assistance of the Pye Mobile Unit, the first without drums, and the second with the assistance of Mike Finesilver (bass), Terry Gittings (drums), Bill Boazman (electric guitar) and Mike Cooper (slide guitar).
THE SONGS: tracks 1 to 13 from the album "Heron" (November 1970)
track 14: previously unreleased full-length version of the song "Harlequin 2"
track 15: previously unreleased outtake from "Heron"
tracks 16 to 19: the Heron maxi-single (April 1971)
tracks 20 and 21: previously unissued tracks (recorded 27 July 1970)
track 22: previously unissued track (recorded 16 August 1972)
Disc 2: the double album "Twice As Nice and Half the Price" (October 1971)
THE MUSIC: mostly originals, bucolic-acoustic-gentle ballads
THE SOUND: Superb remastering
There is a pretty booklet, with many photos and full annotations by David Wells.
Recommended