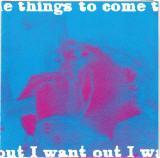 Biography by Richie Unterberger
Emerging from the glut of Southern Californian rock groups in the mid-'60s, Things to Come formed in 1966. Their original lineup included lead singer Steve Runolfsson, drummer Russ Kunkel (who would go on to become a top sessionman), and bassist Bryan Garofalo (also a future sessionman and a member of Glenn Frey's band since 1982). The group cut only three singles in their brief lifetime; Runolfsson was replaced after the first one. Mining a bluesy, British Invasion-styled garage rock in the manner of countless other bands, most of their work remained unheard until a 1994 CD reissue.

Review by Richie Unterberger
The liner notes of '60s garage reissues can tend to go overboard on the hyperbole, but the praise lavished upon this unknown outfit in this booklet really does exceed tasteful limits. This is hardly a band that was "in some ways...charting the same grounds as the Doors." Like many other groups in California and across the country, Things To Come played basic teen raunch with psychedelic touches. With their Farfisa organ, wheezing harmonica, and Steve Runolfsson's snarling vocals, their sound was rather slavishly imitative of the Stones and especially Them, with hints of Love and the Seeds creeping in now and then. Not only were Things To Come not nearly as good as the Stones, Them, Doors or Love, but they were not nearly as good as many other similar garage bands who also imitated the heavyweights listed above. This CD reissues both sides of the only single to feature the original lineup, as well as 16 previously unreleased demos from 1965-67. Most of the material is original, derivative, and rather weak, recycling the "Gloria" riff a number of times. The management-instigated firing of the sandpaper-voiced Runolfsson is presented as a tragedy that short-circuited the group's potential in the enclosed band history, but neither he nor his band had what it took to stand amongst their competition.