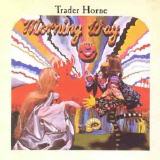 One of the most interesting one-shots of the early '70s, this duo featured Irish multi-instrumentalist Jackie McAuley, who was responsible for some of those great organ lines on Them's early records, and Judy Dyble, who sang on Fairport Convention's first album before being replaced by Sandy Denny in 1968. Their sole LP, Morning Way, is nice if slightly precious British folk-rock with an Olde English, fairy-tale air, and will appeal to fans of the early work of both Donovan and Fairport. ~ Richie Unterberger, All Music Guide

Like many bands before them Trader Horne released an album preceded by a couple of singles, the band promptly broke up and the album sank. Years later it is discovered by collectors and found to be high quality and of interest. The musicians in this band had a pedigree that should not have condemmed the album unfairly. The female singer Judy Dyble had been the original one for Fairport Convention on their first album and Jackie McAuley had been a key member of primal Irish R&B band Them. However here they had both evolved into crafted folk with a production that should have crossed them over to the popular music charts. The songs are folk-pop with psychedelic production touches and like Amazing Blondel are enfused with baroque elements of early music. Harpsicord, xylophone, auto-harp and organ all help this album sound different from many. There is a childlike air to many of the tracks, a fey innocence that is appealing. Some of the tracks have pseudo mystical themes such as the instrumental 'Three Rings for Eleven Kings' however this is never taken too seriously. Each track links to the next with a little short musical segue that provides continuity and reminds of the marvellous uncompleted 'Teenage Opera' by Mark Wirtz. Stand out tracks include 'Morning Way' with it's descending chord sequences and dual vocals and the deeply psychedelic 'The Mutant' with it's treated slightly unsettling vocals. All of the singles are added back to this enjoyable reissued CD which has a sleeve that looks like a Monty Python animation out take. (Mark Coyle)