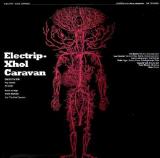 Review:
Before Tangerine Dream, before Embryo, before Kraftwerk, before even the Ohr label, Xhol Caravan released what may be the first album to rightly own the name Krautrock. The band started as a straightforward soul group, Soul Caravan, and bastardized the name for the new direction the group was heading. Early innovators of the creative German sound, and borrowing heavily from that country's love of jazz, Xhol Caravan would always be a historical footnote. Sadly the band disbanded before it could be granted legendary status.
In 1969, on the little known Hansa label, Electrip was released to an unsuspecting public. Sporting wild artwork of a psychedelic nude woman, the buyer had to know this was going to be a special affair. Indeed it is. Starting with a toilet flush, the album blasts away with "Electric Fun Fair". Featuring primarily electric sax, electric flute, and organ as the solo instruments, the music is a mixture of free jazz, psychedelic, Zappaesque humor, and progressive jazz rock. "Pop Games" and "All Green" continue along this path with the same optimistic melodies and insouciant demeanor. Perfect music for driving the MG convertible around the Autobahn, hardtop down, blond babe with heavy mascara and white go-go boots actually admiring your hip music selection. The latter track would be the prototype for similar groups such as Missus Beastly, joyful yet experimental jazz rock. Side 2 is a slightly different breed of cat. On the 17 minute "Raise Up High", the instrumental sections are very similar to the previous side, but here they added some wild English vocals to the mix giving the song a rough hard rock feel to it. As well, this track displays a more experimental and improvisational angle with some free blow moments. Overall, a classic in the field of Krautrock fusion and the catalyst of an entire movement. After this album, flautist Hansi Fischer went on to Embryo to record possibly the greatest Krautrock fusion album ever: Embryo's Rache . Vinyl collectors should note there is a beautiful reissue of the original Electrip, pressed on heavy vinyl and featuring the gorgeous artwork in all its glory. Garden of Delights has finally awarded the album a legit CD press and contains their 45 single from the same year.