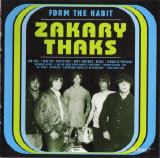 Biography by Richie Unterberger
One of the best garage bands of the '60s, and one of the best teenage rock groups of all time, Zakary Thaks released a half-dozen regionally distributed singles in 1966 and 1967; some were hits in their hometown of Corpus Christi, TX, but none were heard elsewhere until they achieved renown among '60s collectors. Heavily indebted (as were so many bands) to R&B-influenced British heavyweights like the Stones, the Kinks, and the Yardbirds, the group added a thick dollop of Texas raunch to their fuzzy, distorted guitars and hell-bent energy. Most importantly, they were first-rate songwriters, with the breakneck "Bad Girl" (later compiled on Pebbles, Vol. 2), "Won't Come Back," the smoking "Face to Face," "Can't You Hear Your Daddy's Footsteps," and the folk-rock/Merseybeat hybrid "Please" ranking among the top echelon of American '60s garage rock. Their 1967 singles found the group moving into psychedelic territory; some songs betrayed a Moby Grape influence, and some good melodic numbers were diluted by poppy arrangements that recalled the Buckinghams and Grass Roots. Lead singer Chris Gerniottis, only 15 when Zakary Thaks began making records, joined another interesting Corpus Christi garage/psychedelic group, the Liberty Bell.


Review by Richie Unterberger
Both sides of all six of Zakary Thaks' singles are on this last-word compilation, along with three instrumental versions of tracks from the 45s. All of this material has been reissued before on Eva's J-Beck Story 2, with the exception of instrumental versions of "Face to Face" and "Green Crystal Ties." Still, this marks the first time everything's been available in this fidelity in the U.S., bolstered by the inclusion of a lengthy interview with lead singer Chris Gerniottis in the liner notes. It takes its place as one of the very best single-artist '60s garage reissues, the songwriting and musicianship at a far higher level than most '60s garage bands could boast, with just as much insouciant youthful energy. From the punk of "Bad Girl" and the mind-blowing fuzz guitar of "Face to Face" to the Beatlesque pop of "Please," the folk-rock/pop of "Mirror of Yesterday," and the San Francisco-like psychedelia of their final releases (at times even sounding like early Moby Grape), it's all good-to-great stuff. Note, however, that different mixes are used than were heard on some of the original singles, which is particularly noticeable on "Mirror of Yesterday" (where the high mariachi horn parts in the break have been erased) and "Please" (which adds some poppy backup vocals to the bridge).