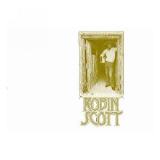 Beautiful folk-rock album with psychedelic touches.Thoughtful, earnest, acoustic guitar-led folk ballads. Backing on the album came from psychedelic legends Mighty Baby. With vinyl copies changing hands for hundreds of pounds, it's finally available on CD, showing itself to be a lost gem of British acid folk.

Robin Scott's 1969 album Woman from the Warm Grass was very much in the mold of many British folk-ground artists of the time who were gingerly making the transition to a folk-rock sound. In fact, in material and presentation, Scott was fairly similar in feel to a few other artists that producer Sandy Roberton worked with, including Al Jones, Keith Christmas, and Shelagh McDonald. Scott's vocals and songs were earnest and verbose, with the reflective fragile moodiness (and yearning, sometimes florid romanticism) found in many British folk/folk-rock singer/songwriters of the era, from Al Stewart and Donovan on down. As artists in this genre go, Scott's pleasant and reasonably interesting, though not distinguished. He and Roberton do vary the arrangements, sometimes opting for just solo acoustic guitar and voice, at others using full rock backing from the band Mighty Baby. Generally, the unplugged tracks work better; "The Sound of Rain," with subdued orchestration backing the acoustic guitar, has the sort of narrative-oriented mystical acid folk pioneered by Donovan, while "Song of the Sun" has the poetic wordy gray melancholy very particular to this period of British folk. So there's a lot here for listeners who dig this particular micro-style in general, with the notable exception of an overwhelmingly strong vocal or songwriting individuality, though Scott's likable enough. [The 2006 CD reissue on Sunbeam adds a nice bonus cut from a BBC session, "Tattoed Lady," that doesn't appear on the original album in any form. This track has lead singing by Scott's girlfriend of the time, Penny Lamb (with Scott on guitar and vocal harmonies), and a slightly brighter, poppier, and more melodic feel than the material that had been recorded for the LP.] ~ Richie Unterberger, All Music Guide