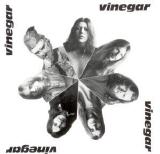 Review:
*** One and only album by German underground band Vinegar originally released in 1971. Musically in style of early Pink Floyd, progressive but very psychedelic, long instrumental tracks but also with female vocalist reminding of Nico. One of the lost treasures from Germany and very sought after!

Recorded on January 9th, 1971 in Studio Rottenburg, Vinegar’s self-titled album was released on LP in a limited edition of 1,000 copies! I’ve read opinions from folks describing Vinegar’s sound as rather Floydian. While this is true, it should be noted that the group sounds much more like a cross between Amon Duul II and Pink Floyd. With that being said, one can easily hear the Floyd influence in the spacey organ, drum fills, slide guitar, and occasional celestial vocals. Likewise, the Amon Düül II influence can be heard in the violin, vocals, and the guitar riffs. Overall, the two styles are combined rather nicely into a sort of progressive-garage-space rock sound. Highlights from the album include ‘Der Kaiser Auf Der Erbse’, ‘Fleisch’, And ‘Sawmill’. ‘Der Kaiser Auf Der Erbse’ begins with a violin solo which reminds me of Edgar Hoffman from Embryo. From there the track switches gears and turns into a rock track with intentionally unintelligible vocals which could be described as Faust-like. Containing a Floydian organ and drum beat, ‘Fleisch’ slowly introduces distorted guitar and bass into the mix before a celestial vocal kicks in and the track begins to take shape in the classically themed “A Saucerful of Secrets” sort of way. Finally, ‘Sawmill’ showcases the bands mixture of Duul and Floyd influence. ‘Sawmill’ starts out as a psychedelic garage rocker with female vocals (reminiscent of Renate Knaup) before taking a spacey turn and sounding like Sysyphus off of Ummagumma. From here the track revives its garage sound before fading out into part 2 which is dominated by an Amon Duul approach. Overall, the album is a satisfying first effort which, sadly, was never followed up due to their break up in late 1971.
(Review taken from krautrockgroup.com)

Quote:
*** Vinegar - Vinegar CD. Reissue of quite an impressive psychedelic prog rock album from 1971, highly recommended. Considered a masterpiece by some. Comparable to the early Pink Floyd. Unfortunately, the only work of Vinegar (of still existing recordings no other tracks can be presented because of a bad sound quality). Clearly one of the most looked for German rock LPs by collectors and rightly so; the sound is progressive and sometimes psychedelic. The singer reminds sometimes of Nico, though mostly there aren?t many vocals. ?An unknown gem from an obscure and innovative band?, as Steven and Alan Freeman have written in their book ?The crack in the cosmic egg? (Leicester 1996). Yet, it is not true, like rumours said, that Vinegar were the predecessors of Electric Sandwich. The CD was taken from the master tape. (Rockadrome)

*** First reissue of this German underground obscurity (recently also released on vinyl by Amber Soundroom). Originally released by Phono Verlag Werner Purrmann in 1971. "'An unknown gem,' as the Freeman brothers call this psychedelic record, 'in the realms of Tractor or Elias Hulk, but with a very Teutonic sound, lots of instrumental and guitar textures akin to Gomorrha.' The other tracks with male and female vocals. From the master tapes." (Forcedexposure)

*** “This obscure group made an excellent album in the ‘garage-underground-progressive’ genre way back in 1971. Vinegar could be ranked along with Mammut as one of the most important examples of such bands. For your amusement, here’s a closer look at their fascinating album: ‘Missi Solis’ starts off in a slow, lyrical and sinister way, not far removed from a Floyd-type depression from 1969. A violin comes in and makes a short solo appearance to great effect, before the guitar and organ develop the main theme. ‘Saw mill – part I’ is a garage rock song with Renate Knaup-like vocals that soon sets off to an outer space of strange sounds – ‘A saucerful of secrets’ reborn. ‘Saw mill – part II’ is more like Amon Düül II, driven by violin, organ and guitar. ‘Der Kaiser auf der Erbse’ goes in another direction, suddenly drunk Goths enter the studio. The last track is ‘Fleisch’, an instrumental return to the almost classical themes introduced in the second half of ‘Missi Solis’. In conclusion: this album is quite fabulous, go out and get it!” ( “Cosmic dreams at play” )