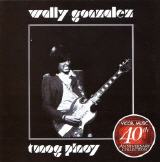 (Aquarius Records)
Wally Gonzalez, guitarist from the Phillippines' proto stoner rock combo the Juan De La Cruz band, stepped out in the late '70s with these two newly cd-ified solo records, 1977's Tunog Pinoy and 1978's On The Road. They're not that heavy but do feature lotsa wailing Wally guitar action -- and wild/cheesy keyboard synth sizzlin' too. Wally fronts 'em both on guitar and vocals and although each was recorded with a different backing band, the two discs are pretty similar. Slow-burning mellow psych pop ballads are mixed with strutting boogie numbers. What titles there are in English are along the lines of "Rock & Roll Mama", "Wally's Blues", "Rockin' Roller" and, uh, "Screw". Neither album is as raw and gritty as the best of Juan De La Cruz, but this is still good fun hard rock and folky balladry, Filipino style, with a polyester '70s sheen that will either kitschly add to your enjoyment or perhaps ruin it totally.

(rockadrome)
A much more varied album than I expected?just listening now to the soaring solos of the third track, Pinag-isa, and thinking how much this sounds like Pink Floyd circa Dark Side atmospheric, with breathy vocals, yet thick with that mid-70?s heavy energy at the same time; then you get to Rock & Roll Mama, and it's stinging guitar leads and crunching rhythm section all the way; Gonzalez clearly was not a one trick (heavy acid blues rock) pony, which explains why this album has always been held in such high regard among those who had a chance to hear it.