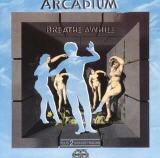 
Arcadium biography (progarchives)
ARCADIUM were a late 60's psychedelic band fronted by songwriter, 12-string guitarist and lead vocalist Miguel Sergides. Sergides was joined by Graham Best on bass and vocals, Allan Ellwood on organ and vocals, John Albert Parker on drums and Robert Ellwood on lead guitar and vocals. Like many, they played the clubs until a small label by the name of Middle Earth - who released a whopping total of five albums - finally approached them. In 1969, "Breathe Awhile" was issued on an LP, the only album the band ever recorded. It has lately been reissued in cd format by German label Akarma.

ARCADIUM's ominous, cathedral-like organ, distorted guitar and anguished vocals are clearly derivative of bands such as the DOORS, IRON BUTTERFLY and VANILLA FUDGE - very much in the 'downer-heavy' school of the genre that was popular at the time. Their album is something of a bad-trip soundtrack that relies on minor-key melodies, ghostly harmonies and anguished vocals. What with all its flaws - bad production, sloppy vocals and doomesday atmospherics - its historical significance is immense. The music's intensity and sense of urgency, the blazing acid-drenched guitars, the tortured vocals and heavy nightmarish sounds all perfectly convey the late 60's atmosphere.

Fans of heavy psychedelia in search of a genuine dose of 60's nostalgia will love this band.


Review by Eetu Pellonpaa (Special Collaborator in progarchives.com)
This is a true gem of late 1960's acid rock, presenting a very depressed and sincere vision holding both composed and improvised themes. MIGUEL SERGIDES is truly the heart of this band. His skillful songwriting talents shine in the constructed parts of this record. His passionate voice is strong and creates strong emotional load. Other dominant elements of the music are strong organ keyboards and guitars weaving beautiful webs of harmonies over it, and also releasing fiery distorted solos. VANILLA FUDGE's "Renaissance" album is stylistically a close comparison with this record. Though ARCADIUM's music is celestial and very trippy, the band found inspiration for their lyrics from themes of the secular world, the quest of being a good human being, a man, a lover.
The album starts mysteriously with mantra like webs building up nearly twelve minutes long opener "I'm on My Way". The surrealistic haze reminds of very early HAWKWIND recordings, especially the calm part with descending voices, slowly gaining power. After six minutes the vocals are introduced in a dreamy and calm space. The descending voice part returns as a chorus, and strong force pulses more powerfully within the surface. Tasty ocean soundscapes opens "the way" where the singer heads, and a fabulous bluesy psych rock jamming begins. Here the vocal lines turn to more aggressive, and the raw and archaic sounds underline the power of this music. This is a tasty as 1960's psych can be!

Next "Poor Lady" presents the band's skills in short and powerful psych rock songs with both catchy minor melodies and strong feeling of surreal, partly created by ghastly backing chants. "Walk on The Bad Side" is another longer song, beginning carefully with very beautiful organ and vocal melodies. Lyrics are here very touching sad wonderings of the world, probably founding sympathy from fans of PETER HAMMILL. The verse is more Major key blues run with space for wonderful psychedelic solos. Among the free chaos the band still plays wonderfully to same direction, and there are many nice arrangements and controlled changes of both rhythms and sections to be found from the music, features often missing from psychedelic recordings.

"Woman of A Thousand Years" is another shorter aggressive rocker fading in peculiar way, being quite OK but not as great as the other songs of the album. "Change me" has a dramatic drive resembling VANILLA FUDGE very much, holding great feeling of desperation in it. "It Takes A Woman" starts with fast jamming and interesting repetitive guitar solo. The verse brings dramatic twist to this composition. The song ends to a quiet part, which sadly fades out.

The last over ten minutes long song on the original album has a humble title covering "Birth, Life and Death". Some warning sirens give start to tasty jamming having playing space for all instruments. Again there is a strong sense of collective control of the band present here, and some surely predefined parts work as a guiding line through the track. The descending organs begin the melancholic sung part. The verse brings few Major key contrast to the overall depression, which is very, very strong, reaching ultimate climax in the end's "good bye world" sequence. Listening to this during depression isn't maybe a good idea!

There are two bonus tracks on CD re-release. "Sing My Song" begins in a delicate manner, but the verse brings forth the power lingering beneath the calmness like in other songs of the album tracks. The melodies are very tasty and classic sounding. "Riding Alone" opens with some acoustic licks, and the tune is driven forward by the guitar instead of the keyboards.

The only negative sides I found from this album are the few fadeout endings and a bit duller short fourth song. But the pure greatness of the vision of this record bears this flaw in my opinion. Recommended warmly for those with taste of raw melancholic vintage psychedelia! I really got powerful feelings from this record, but this is nearly too depressing music to be listened, if you are feeling low already.