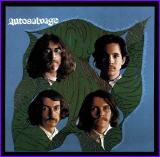 Official CD reissue of the sole album by this great late '60's US psychedelic band who made this one album in 1968. Quirky fuzz guitars, odd lyrics and multi-layered harmonies create a strange brew that leans towards a West Coast sound rather than hinting at the bands East Coast origins. Classic '60's psych cover art. - Freak Emporium

Originally released in '68 and now available for the first time on CD legally. Formed in ‘66 and discovered by FRANK ZAPPA, who reputedly had a hand in this one and only album by the band. Hailing from New York's AUTOSALVAGE merged rock lyrics with avant-garde music to great effect using Medieval instruments. This album is a great addition to collectors of 60's psychedelia. - Record Heaven

Originally released in 1968, this is the only album this New York band ever released. The band's members included Skip Boone, brother of Lovin' Spoonful's Steve Boone. - Evangeline Records

"This group was started in the middle of 1966 by Thomas Danaher, who was a folk and bluegrass freak, and Darius LaNoue Davenport, who came from a musical family. Lead guitarist Rick Turner, son of a poet and a painter, had worked with Ian and Sylvia and then a long line of rock groups. Bassist Skip Boone is the brother of Steve Boone, the bassist for the Lovin' Spoonful.
Originally discovered by The Mothers Of Invention, the group broke up when they saw it wasn't enough to be good: you also had to sell a lot of records to make the sort of money that made the whole hassle worthwhile. Their only album, released in 1968, is full of quiet flashes of brilliance, and there are people about still weeping at the demise of a group called Autosalvage - even if there is a fine album left to remember it by." - Lillian Roxon, "Rock Encyclopedia"

Here's one that's grown increasingly in-demand over the last few years. That demand's probably partially the result of the fact there hasn't been a decent CD reissue. A bootleg CD released in the late-'80s sounded like it was recorded in a subway tunnel and managed to get the track listing hosed up. Yeah bootleggers !!!
Formed in 1966 by bluegrass fanatic Thomas Donaher and multi-instrumentalist Darius Davenport, Autosalvage was one of the mid-'60s more impressive jug band lineups. Boasting an exceptionally talented line up, including ex-Ian and Sylvia sideman Rick Turner and bassist Skip Boone (brother of the Lovin' Spoonful's Steve Boone), the band's sound melded authentic jug band moves with rock instrumentation, a sense of enthusiasm and a willingness to expanded into progressive and out of the ordinary directions.
Reportedly dscovered by Frank Zappa and the Mothers of Invention while on a visit to New York, with Zappa's support the group was signed by RCA Victor. Released in 1968, "Autosalvage" offered up one of the year's odder musical hybrids. Exemplified by original material such as "Land of Their Dreams," "Burglar Song" and "Rampant Generalities" the collection featured a weird mixture of Byrds-styled country rock ("Rampart Generalities"), blues-rock ("Good Morning Blues") psychedelia ("Auto Salvage") and outright pretense. What made the set truly maddening was the fact that while all four members were undeniably talented, they seldom brought those talents together. Among the few tracks worth hearing more than once were the nifty title effort and the single "Parahighway" b/w "Rampart Generalities." Not to sound too damning, the band's willingness to try new things makes it oddly endearing, if not particularly commercial, or memorable. Unfortunately, it all came to little avail since the band called it quits shortly thereafter. - Bad Cat Records

The Mothers of Invention [they were that!] first came to New York City -- it must have been in '67 or '68 -- to play two memorable gigs: At Andy Warhol's Balloon Farm in the East Village, and then at a small transformed movie theater beside The cafe A-Go-Go on Bleeker Street. To give you a flavor of the times: Muddy Waters followed the Mothers at the Balloon farm, while across town was Cream, in their first American gig at the Go-Go. Jimi Hendrix was also on the scene, possibly with beginning ideas for his recording studio on West 8th St., "Electric Ladyland."
Newly formed Autosalvage, myself included of course, first met the Mothers in opening for them at the Balloon Farm -- in reality an old Ukrainian Hall completely festooned in silver mylar. We then played the Go-Go for a few weeks, and were further able to hear and get to know Frank and the rest of the Mothers. We loved their freaky exuberance, backed up and expressed with fantastic chops -- a liberating experience for any musician. But Autosalvage, gaining by osmosis, was the extent of our musical connection.
One otherwise unknown fact for you: Frank had a particular liking for our signature song, "Auto Salvage," and at the time we were searching for a name for the band. Frank said that he would choose our "Auto Salvage" ... and so we did, but with a different meaning implied than junkyard for cars - Tom Donaher