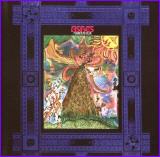 The only album ever from The Ashes -- a group who both pre-dated and post-dated Peanut Butter Conspiracy -- morphing into that famous act after an initial 60s run, then changing back to Ashes form with this group featuring female singer Pat Taylor! Taylor's got a style that's folksy, but a bit fierce too -- a quality that almost gives the group a Jefferson Airplane sound on vocals, but a bit lighter overall and not nearly as trippy. Tunes are relatively straightforward, occasionally a bit rootsy -- late 60s California underground work at its best, although more Northern Cali than southern. Titles include "My Life Has Changed", "Sands Of Love", "Sleeping Serenade", "Gone To Sorrow", "Simple Complexities", "Look Around Rock", and "Her Invention". (dustygroove)

The above line-up is that featured on the album. This Los Angeles band's original drummer was, of course, Spencer Dryden, before he joined Jefferson Airplane. The remaining members, aside from Taylor, later teamed up with Bill Wolff, Lance Feat and Sandi Robinson to become The Peanut Butter Conspiracy.

The Ashes also have four tracks (both sides of their first two singles) on the 1967 Vault compilation, West Coast Love-In (LP). Every Little Prayer, Is There Anything I Can Do?, Dark On You Now and Roses Gone are all characterised by the distinctive melodies that typified so many mid-sixties English bands like The Fortunes. They feature Sandi Robinson rather than Pat Taylor on vocals. Their album is well worth a spin. A very hippyish sixties album with nice lead vocals. (Fuzz, Acid & Flowers)

The Ashes were a folk-rock group formed in 1965 that included John Merrill (guitar/ vocals), Alan Brackett (bass/ vocals), Barbara Robison (vocals), Spencer Dryden (drums) and Jim Cherniss (guitar/ vocals). Before they were known as the Ashes, the group called themselves the Young Swingers and released two long lost 45s under that name: "Love Her Every Day" b/w "Or Else You'll Cry" (Courtney 746) and "Let's Take Our Love" b/w "The Winds Up High" (Portafino 901) . From the summer of 1965 up until May of 1966, the Ashes served as the house band at a club in Santa Monica called the Waleback. They released their first single under their new moniker in 1966: "Is There Anything I Can Do?" b/w "Every Little Prayer" (Vault 924). The a-side was written by Jackie DeShannon and featured a fine lead vocal from Barbara Robison. This 45, along with its follow-up "Dark on You Now" b/w "Roses Gone" (Vault 936), also appeared on the 1967 compilation WEST COAST LOVE-IN (Vault 7980). Around the time of the first Ashes single, Spencer Dryden left to replace Skip Spence in Jefferson Airplane. Jim Cherniss also exited the group at this time.

With the addition of two new members, the band was transformed into the Peanut Butter Conspiracy, who of course recorded two albums for Columbia in 1967. John Merrill resurrected Ashes in late 1968, around the same time that Alan Brackett was working on the tracks that would ultimately constitute the PBC's FOR CHILDREN OF ALL AGES album. The new Ashes recorded their debut LP for Vault Records that year; it stands today as a staple of the collector's market, routinely fetching $50 or more on eBay. The album also featured singer Pat Taylor standing in for Barbara Robison (who could not appear on the record due to contractual obligations). The LP's release was delayed until 1970, while two songs from the record-- "Homeward Bound" b/w "Sleeping Serenade" (Vault 975)-- were issued as a 45 in 1971.