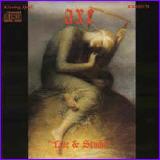 A solid gold discovery. A whole album of unreleased material by this unknown UK early '70s band who sound like a cross between Jefferson Airplane and the Hendrix Experience. Genuinely excellent freaked out acid jams with female vocals and a grrreat version of a "House Is Not A Motel".... Korean issue!

The one previous Axe release on Kissing Spell was widely heralded as the label's finest revelation. This one finds Stephen Smith Inc. digging pretty deep in the scunge barrel, looking for a follow-up relic. This album supposedly features an entire live performance of their debut performance at Lord Barford Croquet Tournament in 1969. Material is all covers (Jefferson Airplane, Canned Heat, Traffic, Neil Young, etc.), with plenty of tape wobble to extend the detuned meter into near avant garde territory. Tons of (uncredited) (lead) sax playing make this one a "must hear." Oh, the historical significance. Promo material mentions bonus tracks on the CD which do not in fact exist. Did I tell you about how this one was described in a recent Record Vault rare records catalog out of Pleasanton, CA (Zarrence Smith, proprietor)? "Tremendous heavy psychedelia... a real classic acid-rock sound, top of the line! Housed in a deluxe color art cover. Highly recommended head-grooves!" Huh? This record is not tremendous nor heavy, barely classifies as "psych" or "acid-rock," and is nowhere near the "top" of any line I've ever seen, heard, or pissed on. A couple of lame and out of focus live gig snapshots has never earned the term "deluxe" before, either. What this record is, is a historical curiosity, an unearthed artifact of the nascent, semi-coherent rumblings of what would become a semi-interesting genesis. For that purpose, it's worth a spin, maybe even all the way through. Expect anything more and you're as fucked as Mr. Smith. Good night.