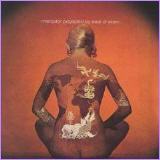 East of Eden's debut LP is one of the hardest rocking albums to come out of the progressive rock movement, and maybe the best non-Rolling Stones albums issued by English Decca during all of the late 1960s. It's also one of the most daring debut albums of its period, less tightly focused than, say, King Crimson's Court of the Crimson King but otherwise equally bold and maybe more challenging. The whole record is eerie -- coming from a pop culture where most psychedelic rock tended toward the light and airy -- the way the high-impact bass, drum, and guitar parts interact with the distinctly Oriental and Central/Eastern European classical influences The title track is a surprise coming from any British psychedelic band of the period, opening with a pounding heavy metal beat pumped out on Steve York's bass and Dave Dufort's drums, while Dave Arbus' electric violin subs for what would normally be the rhythm guitar part and Geoff Nicholson's guitar twists a blues riff around before setting a Jimi Hendrix-like wave of tonal pyrotechnics ablaze for the finale. Though most of the rest isn't as hard rocking as that, it is still progressive rock with balls. "Isadora" may have a few flute flourishes too many, but it also has a beat, and "Waterways" (described on the original jacket as "Niotic Landscape in 5/4"), after a meandering opening, breaks loose in a hard-edged piece of heavy metal raga rock (with a sax part that fits in perfectly), something like what the Yardbirds might've attempted if they'd stayed together through 1969 and forsaken their pop pretensions -- and then it finishes with the kind of brooding, violin-based ballad that anticipates the 1973-era David Cross/John Wetton/Bill Bruford lineup of King Crimson. And "Centaur Woman" takes us back to almost a mid-1960s blues-rock mode, reminiscent of the Graham Bond Organization, except that East of Eden quickly kicks out the song structures, taking Coltrane-like sax excursions before throwing in an extended bass guitar solo. Side two of the album opens with the brooding "Bathers," perhaps the most conventional progressive cut on this album and, not coincidentally, the least interesting song here. "Communion," by comparison, is a composition whose inspiration was a Bartok string quartet, and is dominated by Arbus' violin. The album finishes with the high-energy "In the Stable of the Sphinx," a blazing showcase for electric guitar, violin, tenor, and alto sax that's worth the price of admission by itself and must've been amazing to hear on stage. Mercator Projected was reissued on CD in Japan in 2000 as part of the British Rock Legend Series by Universal Music Group.

Progarchives Review: Welcome to one of the lost gems of early prog! Released in the same year as In the Court of the Crimson King, Mercator Projected marks the debut of of one of the most exciting, authentically progressive acts of the original prog era, now unfairly forgotten by most. Drenched in exoticism, from the stunning cover (depicting a heavily tattooed woman's back) to the evocative title (a Mercator projection is a cylindrical map projection that distorts the shape and size of large objects), in spite of its undeniable rawness the album is a thoroughly exhilarating listen, blending Eastern sounds with jazz, blues, heavy rock and psychedelia in a heady brew that might at first sound dated, but is still deeply intriguing for a discerning music fan.

One of East of Eden's strengths lies in their use of an impressive array of instruments that, at the time, were still not common currency in the rock world. Dave Arbus' electric violin dominates the proceedings, weaving ethereal melodies or bringing a strident note to the compositions, while saxes and flute add a very distinctive character to the band's sound. In the best tradition of the original progressive rock movement (and not unlike KC's seminal debut), the songs on this album are at the same time accessible and experimental, soothing and harsh. While the band don't deny their rock and blues roots, they also push the envelope with their richly textured soundscapes, evocative of many different moods.

Closing track In the Stable of the Sphinx, a jazzy, sprawling instrumental (also present in a longer version in the 2004 remaster), is possibly the album's masterpiece: mainly guitar-driven, unlike most of the other tracks, it features some brilliant sax and violin work. Flutes take centre stage in the dreamy, hippyish Isadora; while Waterways and Bathers conjure images of Eastern-style languor and sensuality, with lashings of sumptuous violin and keyboard melodies. On the other hand, the bluesy, harmonica-driven Centaur Woman sounds somewhat harsh, and is in my opinion the weakest offering on the album, even though the slightly distorted, dramatic vocals add some interest to the song.

As previous reviewers have already stated, Mercator Projected is not the accomplished work of a seasoned band. However, even in its raw state it shows the promise than East of Eden would fulfill in their sophomore effort, Snafu. It is a great pity that they did not achieve the fame they deserved for their highly individual, creative approach to prog - they could have become as big as Yes or King Crimson, but now they are forgotten by almost everyone but the real aficionados of the beginnings of the genre.

On any account, this album is highly recommended to anyone who likes their prog to be a challenge, even if a bit rough around the edges. Four and a half stars from me for a disc that every self-respecting prog fan should at least try once.

Progressiveears Review: The first East of Eden album appeared in February, 1969. The poster accompanying the original release on Deram Records proclaimed “Sounds from every hemisphere fuse and form cosmoramic rock!” The back of the LP sleeve itself was more erudite: “Take one electric violin which blows rock and Bartok, add one flute from the East, mix in Sumerian saxophones, bass, drums, guitar and liquid word pictures.”

The first song is a catchy 5 minute violin propelled rocker entitled “Northern Hemisphere” that includes some memorable ‘out there’ lyrics like “We like the northern hemisphere, that’s where the strangest things appear” imbuing the music with a mystical quality. The utterly eclectic nature of East of Eden is demonstrated 1:46 into the gentle psychedelic ballad “Isadora” plaintively sung by Geoff Nicholson when the beat shifts to ‘ska’ with Dave Arbus’ flute whistling away, duetting with sax player Ron Caines, a ‘song within a song’. “Waterways” is an atmospheric ‘eastern’ piece with slightly melancholy but haunting violin refrain and is described as a ‘Nilotic landscape in 5/4 (answers on a postcard please!) It actually reminded me very much of what Camel would do later.

Steve York adds harmonica and Ron Caines takes the vocal duties on the hilarious blues/ jazz rude pastiche “Centaur Woman” with its extraordinary walking bass line joined by flute and sax. There’s even a ‘bass duel’ between, well York and York the ‘finest young bass player in the universe’, ‘Half woman, half beast, half bass guitar’ is how “Centaur Woman” is described on the original sleeve- fair enough! At the end, free from jazz erupts, is every bit as chaotic as contemporary Dave Jackson’s work with Van Der Graaf Generator. “Bathers” is pastoral, early Pink Floyd inflected

“Communion” is ‘inspired by a Bartok string quartet and, after a brief oppressive opening contains some incongruously light and airy flute and some inspired drumming. Nicholson’s charming vocal style is perfect for the short psychedelic song “Moth” while “In The Stable of the Sphinx” is an 8:30 instrumental that sees the musicians take stock and suddenly become disciplined.

The Esoteric remaster has three bonus tracks, all worthwhile in their own way. The “In The Stable of the Sphinx” demo is 2:40 longer than the version that made the album and I prefer it in many ways despite the slightly inferior sound quality. There’s a harder edge, more of a driving rock quality about this version than the one that ended up on the album. The demo version of “Waterways” is also more daring than the one that ended up on the official release.

There’s also a faithful evocation of The Byrds’ “Eight Miles High” stretched to nearly 7 minutes that the band recorded in early September, 1969. Some spirited playing redeems the questionable vocals and the band leave with (more or less) their reputations intact. It actually suits Dave Arbus’ fluid, pterodactyl like violin and the strident rhythm section rather well and allows Geoff to play probably his best guitar break to date.

So East of Eden were a true musical collective playing an exotic, eclectic an unique brand of jazz/ avant-garde influenced progressive rock with every musician’s contribution valued and highlighted and every composition credited ‘East of Eden’. Finally, a reminded that Mercator Projected made the top 30 of the recent progressive ears 1969 albums of the year poll. ~ AMG