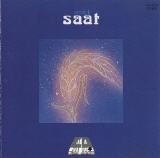 "Saat is a little-known gem and Krautrock classic, an album full of dreamy and beautiful melodies. The Emtidi duo considerably expanded its instrumentation and style, and played a unique mix of folk, art rock, and psychedelic music. Besides acoustic guitar, the sound is mainly dominated by synthesizers, Mellotron, and other keyboard instruments, which are often played in a classical style. Some softly floating organ parts are comparable to early Tangerine Dream. In contrast stands a song like "Love Time Rain," which could be written by the British folk band Pentangle. On most tracks, Dolly Holmes sings lead with her high, transfigured voice. Aside from "Die Reise," a fairy tale story sung by Maik Hirschfeldt, all the songs have English lyrics. The album has a surprisingly full sound for a duo recording, although no drums were used. Most contemporary German bands played with new styles and sounds, but only a few obtained such wonderful music out of their experiments." ~ Klaus Kehrle

"Emtidi was a German duo stuck somewhere between the Kosmische and psychedelic movements stylistically. Despite having only two members a full sound is provided, as Maik Hirschfeldt provides guitars, flute, some keyboards and vocals while Dolly Holmes is charged with lead vocals and most of the keyboard work.
Much of the instrumental work here is soothing and relaxed, a sun-drenched counterpart to groups like Tangerine Dream. The drone at the start of "Touch the Sun" is reminiscent of that band's Alpha Centauri, although it features moments of wistful release rather than perpetually building an anxious, hopeless tension. Some wilder Krautish moments show up on tracks like "Die Reise", but for the most part chaos is minimal.

The duo sometimes eschews lyrics in favour of vocalisations, which work pretty well within the framework of the music. One good argument with sticking to vocalisations is "Walking in the Park", featuring the incredible line (no, I am not making this up), "Don't sit on the grass, it's too cold for your ass". A nice hippie sentiment, but I suspect the language barrier makes this one more hilarious than intended. Holmes' voice is somewhat reminiscent of Annie Haslam's, although somewhat thinner. One realizes that comparing a female voice to Haslam's is a prog rock reviewing cliché, but in this case it's absolutely valid. Hirschfeldt grabs lead vocals on the final track, in German, although he tends to speak them more than anything.

If the idea of crossing Renaissance with Tangerine Dream and having them add some psychedelic acoustic material appeals to you, rush right out and grab this. I find the combination pretty appealing, as despite the variety of styles presented each one is strong in its own right.

Emtidi was the duo of Maik Hirschfeldt and Dolly Holmes (she was also a guest on The Incredible String Band's The Hangman's Beautiful Daughter). Based in Germany, the partnership's music can best be described as folk music with a prog tinge. Maik provided twelve-string guitar tapestries often times reminiscent of Anthony Phillips. Dolly's keyboard arsenal included acoustic and electric piano, spinet, Hammond, and mellotron, and her passages on these are laced with delicate Baroque-era stylings. The two both shared vocal duties, with Dolly usually taking lead. Her voice is usually right on the money (Maik's much less so), though in conjunction with the lyrics, can sound a bit hippie-dippy at times. Saat, recorded in 1972, was the duo's second release and is a pretty decent if not quite essential album. The best track on this album is the 11-minute "Touch the Sky," which drips with the Aquarianisms of the day, and has some great guitar and 'tron. "Love Time Rain," "Träume" and the title track are all enjoyable little tunes. "Walkin' in the Park" is nice, but tarnished by one awful (and repeated interminably, no less) lyrical line in the chorus that would make even Greg Lake turn red. You'll know which one I mean when you hear it. The closer, "Die Reise" is enjoyably bizarre, and is the only track sung in German. Texturally sparse: I often wonder what this would've sounded like with a full group backing it. The ending jam that closes "Walkin' in the Park," for example, sounds somewhat dinky with just two folks pluggin' away."