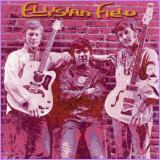 When Louisville cult legends Soul, Inc. broke up, former members Jim Settle, Marvin Maxwell, and Frank Bugbee went in a radically different direction with their next band, Elysian Field. The change in musical course is evident right from this collection's first track, "Mother Hate," which is lean, taut hard rock that manages to be heavy without seeming ponderous. "I Hate You" features a mind-numbing exorcism of a guitar solo that could have given Jimi Hendrix a run for his money, as well as bad-attitude lyrics that nicely summed up the psychological territory being mined by this best-known version of the band. The collection is top-heavy with Elysian Field's mid-period explorations into the heavier end of intense rock, which is perhaps misleading, given the mainstream-worthy pop of some of its initial efforts. Nevertheless, it was that more intense attitude and music that the band members wanted to be known for, and it is easy to see why, considering the driving quality of the songs -- from the joyous straight rock of "Reservation," which melodically predicts Blue Oyster Cult, to "I Think I Can't Live Without You," a song very reminiscent of Steppenwolf, to snarling, more vitriolic tunes. Still, the band has nothing to be ashamed of when it comes to the early, polished pop singles required of them by their record company. Many of these songs are perfectly lovely ballads that veer close to Classics IV/Johnny Rivers territory, often backed by brass and strings, with touches of sophisticated Motown soul. There is little evidence that the band felt constrained by pop song structures: the songs, highlighted by the Classics IV soundalike "Stormy," are full of pretty harmonies and haunting melodies ("Alone on Your Roof"). The final recordings that fill out this CD reissue were put on tape after the band had already separated; they are frequently scintillating early-'70s hard rock that perhaps only lacked a distinguishing, intangible characteristic, because in every other way, they are as good as, or superior to, much of the mainstream rock of the time. The music has dated to a certain degree, but the skill level and songwriting abilities exhibited by the band have not. More than simply a sidelight to the legacy of Soul, Inc., Elysian Field was a powerful entity in its own right, and since this collection contains all of the band's recordings, it is their definitive document. (Stanton Swihart, All Music Guide)

The final incarnation of Soul, Inc. The band had by now transitioned from the innocence of the Pop/Rocl/Psych sound to a more hard, angrier, and heavier sound, very much like most of the music in late 1968 and early 1969. 17 never before released tracks PLUS their two Imperial 45s and newly discovered acetates from 1968!!

In 1968 Soul, Inc. disbanded and Elysian Field (mythological term for paradise) was born. Some of the best bands come from great bands breaking up. This was one of those occasions. Soul, Inc. was a great band; nevertheless some of the members were disenchanted with the direction the group was taking. Former members Jim Settle, Marvin Maxwell, and Frank Bugbee took a radically different direction with their new spin off group. This collection is all of their recorded works. The pop sound of Soul, Inc. was too restrained for the three rockers, and the sounds that you will hear on this two-album set are evidence of that. Although there are only a few polished pop songs, to keep the label happy at the time, the majority of the songs have a harder edge that gets away from that pin up pop studio sound that they felt was holding them back from being who they really were.

'Mother Hate' and 'I Hate You' seemed to be Elysian Field's way of expressing their dislike of the previous group and the situation that they had left behind, it was the proverbial raising of the middle finger and snarling through the music. The anger turned into some inspired playing and some great cuts. They got into the studio and did what they always wanted to do…cut loose and become the bonafide rock band they always wanted to be.

This group was very talented, so much so that they could have easily taken any direction musically that they set their sights on. They were heard in the best light as the killer garage-psych-rock outfit that had the guts and hindsight to do what their hearts told them to do. I loved the Soul, Inc. collection but I must admit that this was an excellent collection as well, one that made me realize that the three members who were the core of that original group had what it took to do what ever they decided to do, and do it successfully without holding back a thing. You can hear it in all in the music. You will be stunned how good all of this music sounds bearing in mind how long ago it was recorded. Even though some remastering can do wonders, groups like Elysian Field sound as fresh and vital today as when they first stepped into the studio. Now that is the beauty of timeless rock and roll.