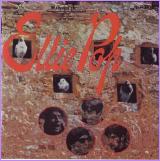 Eponymous 1968 Mainstream label album is definitely a pop/psychedelic classic-in-waiting, whose time has perhaps finally come; great songs right from the start, all oozing Beatles harmonics, with tracks such as 'Some Time Ago' and 'Caught In the Rain' especially thick with Beatles influence (thus explaining their appearance on the Pepperisms compilation); as with most Mainstream releases, there is precious little information on the band in the original LP notes, besides the fact that they were a quartet, with brothers S. and R. Dunn responsible for writing all tracks; this is really a wonderful set of catchy and commercial songs, not exactly psychedelic, with innovative edge-distorted guitars and odd time signatures that make every song worth hearing. Naturally the album vanished without a trace upon original release, followed soon by the band. Liner notes feature a few words from the band's guitarist, as well as some gig listings alongside some Michigan heavy-weights, leading one to think that the band were from that state.