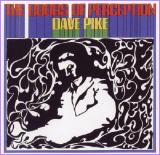 Dave Pike is a jazz vibes player who has made a selected number of fine jazz albums in the 1960's and 1970's. One of these is "Doors Of Perception" and features Lee Konitz, Eddie Daniels, Don Friedman & Chuck Israel.

The Doors of Perception, recorded by Dave Pike and his group, is one of the oddest records in his rather exotic -- and utterly hip -- discography. Produced by Herbie Mann and featuring a cast of all-stars including Lee Konitz, Eddie Daniels, Don Friedman, Chuck Israel, and Arnie Wise, this is the Pike version of an acid experiment. On this 1970 release (recorded perhaps as early as 1966), Mann gets all crazy with sound effects like echo chamber, piped-in applause from a make-believe audience, thunderstorms, the dancefloor of a crowded discotheque, a Leslie speaker recorded on overload on warbling audio tape, perhaps even the sound of a live date. Though only 27 minutes long, the impression of this disc will stay with listeners long after the record ends. It begins with a storm -- literally -- on "Free Improvisation": thunder, rain, the whole deal. Both Konitz and Daniels blow almost freely, with Pike improvising around them. However, the rhythm section keeps it all focused and in some kind of strange groove, and it works -- and it's only three minutes long.

Things move quickly to a burning boogaloo jam on "The Drifter," with all the aforementioned effects (aside from the thunder) put into play. The heavy R&B vamp and Israel's electric bass kick it before Daniels solos and then Pike gets in the pocket and grooves. At just over seven minutes, it's the second longest cut and worth the price of admission. With its fuzzed-out bassline unlike anything heard before Miles Davis and Michael Henderson, the title cut walks a tightrope between Jazz for the Jet Set and West Coast-style cocktail jazz, as underscored by the heavily reverbed vibes and Friedman's hip piano work. "Ballad," on the other hand, is relatively straight, sweet, soft, and tender, but again features those spacy vibes. The whole joint gets taken out the door with "Anticipation," a hard bop number with great alto work from Konitz (albeit sounding a little warped by shifting primitive stereo effects) and Daniels that alternates between the latter's down-and-dirty blowing and the former's elegant phrasing. The rhythm section just dazzles, with Friedman doing some of his best work in both comping and soloing here. He's deep into the groove laid down by Wise and Israel -- the latter of whom walks that line and gets good wood on his upright. When Pike enters with his bright vibes, the whole thing moves off into jazz via the Jetsons! While The Doors of Perception may not be every Pike fan's cup of what have you, it will certainly appeal to those who dug his sides for the German MPS label in the early '70s. The bottom line: there is so little of his work available on CD in America anyway that this one -- particularly as a budget release -- is well worth plunking down the cash for. ~ AMG review by Thom Jurek