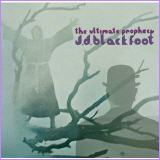 AMG Biography: J.D. Blackfoot is a Native American-themed artist who was actually born Benjamin Franklin Van Dervort in Cleveland. The frontman for an Ohio band called the Ebb Tides (as Benny Van), he re-formed the group under his most famous name around 1969 and recorded a single for Mercury called "Who's Nuts Alfred." An album, The Ultimate Prophecy, followed soon after and found the group dabbling in acid rock and folk/country-rock. The group soon melted away after the LP's lack of success — though it's still prized in prog/psych circles — and Blackfoot went on to record the mid-'70s albums The Song of Crazy Horse and Southbound and Gone for Fantasy Records. He retired from music in the '70s, but returned in 1988 with a new company, Sisapa Records, which signed and recorded Marshall Tucker, Paul Cotton (Poco), and Crazy Horse, as well as Blackfoot himself on the 1991 album Tokala (a sequel to The Song of Crazy Horse). A popular artist in New Zealand, to where he often traveled for performing and recording, Blackfoot continued releasing albums during the '90s, including 1997's Ohio Dream EP and 1998's Footprints. In 2000, he issued Co-Dependent Dysfunctional You, and the career compilation Ultimate Years followed in 2002. Yellowhand appeared in 2005.

Head Heritage: I had never heard of this band or record until I bought it from a particularly insistent stallholder at a fair in New York this summer, and it has proved to be worth every cent of the $40 we agreed on. J.D. Blackfoot is both the name of the singer and the band. They / he were from Ohio and won a contract in a 'battle of the bands', I believe- although it is hard to believe that there was much of a battle left to fight once these boys took the stage. Think what Henry VII would have made of Bosworth if he had a nuclear missile to play with and you'll get some idea of how much better than practically anything else of its sort this album is. Prior to its release there was a 45 (in 1969), also on Mercury, called Who's Nuts Alfred / Epitaph for a Head, which isn't on the album (and which I'd love to hear if anyone has it). What I like about this lp so much is that it contains the sound of a real BAND- consistently sparky interplay and inteligent flourishes from each musician, all within a storming selection of songs that they have clearly rehearsed thousands of times, without getting tired of. I forgot to mention the heavy part- this is easily one of the heaviest psychedelic records I've ever heard, filled with absolutely berserk drumming and riffing and completely inscrutable lyrics wailed very tunefully by J.D. What lifts this out of the heavy rock/psych quagmire is the sensitive and very nimble playing by all on display throughout. The musicianship is excellent and each song is distinguished. The first side consists of five very memorable songs, two of which are pretty, psychedelic ballads and the remainder of which absolutely roar- in particular the mysterious 'Good Day Extending Company'. Side 2 consists of a 20-minute psychedelic opus in several linked sections, called The Ultimate Prophecy, which has to be heard to be believed. Absolutely skull-splitting drumming and scimitar-sharp guitar are present and correct throughout, and despite the absurdly pompous lyrics, this stands as one of the best 'sides' I know. This album proves to me something I should have realised before: that psychedelia is a genre in which there is always something new and amazing to listen to. In a month or so, I have gone from complete ignorance of this album to absolute ecstasy over it.
NOTES: the lp was issued by Mercury in the UK with a different cover, but those copies are extremely rare. A nice US one is about $100, and should have an insert with it. J.D. Blackfoot moved to New Zealand in the 70s and has made 2 or 3 further lps, which are also well-regarded, if not in the same category as this. The Ultimate Prophecy came out on a private, limited cd issued by the man himself a year or two ago, and you can pick it up on ebay every now and then. - By volehead.


Album Reviews:
#1: The Ultimate Prophecy was recorded in 1970 on the Mercury label and received a spotlight pick in Billboard, Cashbox, and Record World magazines. It was a huge selling album in markets like St. Louis, MO and Columbus, OH, staying at the #1 position for nine straight weeks on the WCOL - Columbus chart. It was released in 22 countries. It now sells used for around $65 to $85 (U.S.), and unopened copies sell today for as high as $350 (U.S.). The title track "The Ultimate Prophecy" is comprised of 5 songs that tell a philosophy of life, death, and rebirth back into this universe. - Official Website.

#2: In the late ’60s J.D. Blackfoot whose 1970 LP The Ultimate Prophecy has been illegally reissued by Fallout boasted two talented songwriting guitarists: Craig Fuller and Jeff Whitlock. After Fuller’s brief stint in the Ohio psych-rock outfit, he formed Pure Prairie League, which in 1974 clogged transistor radios across the U.S. with... Amie, what you gonna do. Several years back, when I used to clamor for obscure psych reissues the way I do authentic New York pizza, I would have dismissed Fuller’s career path as pure devolution. (From freaky LSD jammers to soft rock? C’mon!) I am, however, a different man these days. Not only has vintage country rock seized my soul; PPL’s first two records, Pure Prairie League and Bustin’ Out, the ones before the U.S. government forced Fuller to quit his own band, rock my world on a near-weekly basis. I mention this because the only tracks on The Ultimate Prophecy I'm now listening to are the very ones I would've skipped not more than three years ago. I just love the a-side, which is a collection of rustic folk-rock: sturdy, well written and perfectly executed. Fuller and Whitlock dominate these tracks. The b-side, in contrast, is a schizophrenic mishmash of heartland boogie, rock opera histrionics a la The Who Sells Out, and LSD-dosed monologues from Mr. Blackfoot himself. Here’s an excerpt: …and he hath given to the earth people/ To sit and look profound/ But they will be known as love creatures/ Born to live on sound-ound-ound-ound… This stuff reeks of total insanity, and there was a time when I would get all fucked up and crank total insanity for hours. But not anymore. Of course, the argument could be made that I'm restricting myself to the a-side and its catchy tunes because I'm older and married, and with those things comes a craving for consistency, quiet craft, simple pleasures, etc. That's certainly true, but in this particular situation Fuller's talent can't be overlooked. There's a good reason why Blackfoot opened the Mercury-released Ultimate Prophecy not with his own wacked-out, hippie shtick, but with two compositions from his young guitarist -- because he was in a league of his own. Fuller was writing tunes more than worthy for any Buffalo Springfield LP. The dreamy, West Coast ballad "Angel" (re-recorded for Bustin' Out) contains intricate and wonderfully melodic picking that betrays Fuller's rural background. Southern Ohio, where he grew up, has always been a hot bed for bluegrass -- West Virginia and Kentucky are just across the river. In fact, Fuller sounds more at home with country than do most of his peers out in L.A. He's a true middle American, something he would explore far more deeply with Pure Prairie League. Having said all that, there is a single but significant moment when the opposing visions of Fuller and Blackfoot come together: "Good Day Extending Company." Obviously influenced by Moby Grape's blitzkrieg acid-country, the group utterly rages, yet keeps it all buried in rich, moist soil. It's a stellar track for sure, but still, PPL is where it's at. More on them in the future. - Strawberry Flats.

#3: When I was growing up, The Ultimate Prophecy was something of a cult favorite, at least on one of the radio stations in St. Louis, Missouri. Mining the fertile fields of country and hard rock, the first five tracks on this disc make the strongest case for The Ultimate Prophecy as something of a lost curiosity. “One Time Woman” sports some excellent lead guitar work, and wouldn’t have sounded out of place on an early Pure Prairie League album. As for the other tracks, “Good Day Extending Company” is the hardest thing on side one, although the vocal is mixed a bit low and the lyric is dumb. “I’ve Never Seen You” is just as melodic as the Fuller songs, but not especially memorable. And then the record flips over and goes to pot. But the first several songs are great, and if you’re a fan of obscure but mostly accessible early-’70s rock with occasional country leanings, J.D. Blackfoot’s The Ultimate Prophecy will introduce you to at least a few excellent songs. If ridiculous conceptual suites are your bag, well, there’s something for you, too. - Tom Useted, Pop Matters.