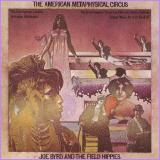 Joe Byrd And The Field Hippies - The American Meta

Joe Byrd And The Field Hippies - The American Metaphysical Circus (1969)

The American Metaphysical Circus is a landmark psychedelic recording of the late 1960's, largely unparalleled in having remained in print for nearly 20 years. It was recorded by Joseph "Joe" Byrd after his departure from the band The United States Of America, and featured some of the earliest recorded work in rock music utilizing extensive use of synthesizers and vocoder, along with an extended group of West Coast studio musicians he named as Joe Byrd and the Field Hippies.

The album is most noted for "The Sub-Sylvian Litanies" which opened Side A. This three part-suite has been described as "an entire acid trip in 11 minutes". Other album highlights include the similarly-oriented "The Elephant At The Door", and the politically-charged "Invisible Man", written for and aimed squarely at President Lyndon B. Johnson. Two of the more unusual tracks on the record are "Mister Fourth Of July" - a ragtime tune complete with scratchy 78RPM-style effects, and "Leisure World", featuring narration from long-time ABC voice-over and "Ghoulardi" originator Ernie Anderson in an ode to California's first retirement mega-community.

Among the musicians featured on the record are prominent West Coast studio musicians Tom Scott and the late Ted Greene, who is credited with the album's stellar guitar work in one of his few recorded appearances. Meyer Hirsch was a member of the Buddy Rich Big Band. Vocalist Victoria Bondhas gone on to a prominent career as a classical composer, conductor and vocalist. Fred Selden, a student of Byrd's at UCLA, joined the Don Ellis Orchestra (led by Byrd's partner in the UCLA New Music Workshop), received a Grammy nomination, and later returned to UCLA to receive his PhD.

The extensive use of effects, delays, echoes, backwards vocals and other recording tricks and techniques are reminiscent of some of the experiments and work carried out by George Martin on behalf of The Beatles during their psychedelic phase of the late 1960's, as well as Pink Floyd - Byrd in fact referenced Martin in a 2004 interview.

The album's cult status was confirmed by its presence in the Columbia Masterworks catalog for an estimated twenty years. Byrd reported in 2002 in an interview published on Salon.com and follow-up in regards to a letter filed in the infamous Napster music copyright case, that despite estimated sales of at least 100,000 units for The American Metaphysical Circus alone, he had never received a penny of royalties for either The United States Of America or The American Metaphysical Circus from Sony/Columbia/CBS.

Because "The American Metaphysical Circus" offered a markedly different sound in its intense horn and woodwind arrangements and even more novel content than on the earlier "The United States of America" release, many fans of the earlier record are not as enchanted with the latter, and vice-versa. In the UK, the first United States of America was more well-known and highly regarded, in part because of the inclusion of one track on a popular Columbia sampler album, The Rock Machine Turns You On, which was not released in the United States. In the U.S. the remarkable persistence of "The American Metaphysical Circus" kept it in print for nearly twenty years in the Columbia catalog, whilst "The United States of America" was relegated to cut-out bins shortly after its 1968 release. The fact the United States of America remained largely obscured, as discussed by lead singer Dorothy Moskowitz in a 2003 interview , until a revival driven by English bands including Portishead, Broadcast and Radiohead in the 1990's, speaks to the historical significance of each release in each country.

It has become a popular and oft-repeated misconception, with the more recent revival of interest in The United States of America, that The American Metaphysical Circus was not as popular or a commercial success, whereas factual information discussed by Byrd surrounding the Napster case and the experience of American record enthusiasts confirms exactly the opposite.

Prior to its re-release, mint vinyl copies of The American Metaphysical Circus were sold by collectors for prices sometimes in excess of $100US, and the both the original 1969 issue and 1996 CD still command premium prices on collector Web sites. Atlantis Records described the 1999 re-release as "sought after 60's American Psych/Electronic rock classic from United States of American mainman Joseph Byrd" . Gatefold Records offered "Welcome re-issue of the 1969 followup to the United States of America album (Joe Byrd was the leader of that group). Trippy Moog and electronics noodling mixed with stunning bursts of fuzzed out guitars and acid-damaged lyrics".

lot of people overlook that this is a concept album about death, dying and decline.
The deaths (or invitations to death) are 60s current-event related -- death by ghetto violence, by the Vietnam War, or by taking LSD and jumping out the window. What? you might ask. When on the album does someone take LSD and jump out a window?

Maybe they don’t, but maybe they do. This album is open to myriad interpretations. The first words on the album are the chant, “Waiting to die,” the end product of a contemplative or drug-induced trance from which immediately springs the song “You Can Never Come Down.” Come down from acid? Sure, that’s the initial interpretation. After all, she tells him that he’s “Trapped on a mountain nobody can climb.” But how about if she were alluringly singing that he can’t come down if he jumped out the window?

With Susan de Longe’s incomparably seductive voice, a sexual interpretation here is initially unavoidable, especially given some of the other lyrics. But do women generally seduce men who can never come down? (I suppose one could see him as being unable to come down from great success, but it doesn’t fit the attitude of the album.) Her last words to him are

“Come fly with me
Come die with me”

My preferred interpretation here is that she is illusory, the voice of LSD, enticing him to die, which he has been waiting for since before the song began. It is possible that she’s inviting him to have an orgasm -- which the French call “petite morte,” or little death. Or perhaps she’s telling him to grow old with her until death.

Indeed, most of Side Two is taken up with songs about old age. Or, to put it another way, about not dying young. Some people don’t like side two, which at times is like listening to The Firesign Theatre with much blacker comedy. (A great comic moment from Side One: No one remembers President Johnson’s name in Johnson City.) This band is not above playing
nursing home music and doing a mock commercial for a retirement community, depicting Victoria Bond, another of the band’s singers, as a senior citizen, to make their point about living and dying, regardless of how unhip the sound.

Side Two is indeed blighted with a supposedly gospel song that actually sounds more like Salvation Army music. But as god-awful as the gospel song is, the side is redeemed by, “The Elephant At The Door.” This masterpiece of a song is both brutal about dying and cheerful about death. It describes an old person’s final decline in a way that could make you think
that jumping out the window on acid isn’t such a bad way to go. And that going isn’t such a bad thing to do.

And sleep will come in different colors,
Clearer than you’ve ever seen before.”

The album does suggest reincarnation, such as the reprise from the geriatric “Sing-Along Song” being played on a baby’s cradle toy, and the album’s opening sung line, “Waitin’ to die for the seventeenth time.” The 17th time of waiting or dying?
As with life and death, the rules are unclear and subject to interpretation.
Despite it’s flaws, which include a bit of instrumental aimlessness, this is one of my 10 favorite albums of all time, famous or obscure, in any genre.