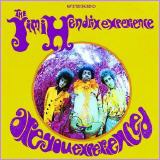 The Jimi Hendrix Experience - Are You Experienced

The Jimi Hendrix Experience - Are You Experienced (1967)

One of the most stunning debuts in rock history, and one of the definitive albums of the psychedelic era. On Are You Experienced?, Jimi Hendrix synthesized various elements of the cutting edge of 1967 rock into music that sounded both futuristic and rooted in the best traditions of rock, blues, pop, and soul. It was his mind-boggling guitar work, of course, that got most of the ink, building upon the experiments of British innovators like Jeff Beck and Pete Townshend to chart new sonic territories in feedback, distortion, and sheer volume. It wouldn't have meant much, however, without his excellent material, whether psychedelic frenzy ( "Foxey Lady," "Manic Depression," "Purple Haze), instrumental freak-out jams ( "Third Stone From the Sun), blues ( "Red House," "Hey Joe), or tender, poetic compositions ( "The Wind Cries Mary) that demonstrated the breadth of his songwriting talents. Not to be underestimated were the contributions of drummer Mitch Mitchell and bassist Noel Redding, who gave the music a rhythmic pulse that fused parts of rock and improvised jazz. Many of these songs are among Hendrix's very finest; it may be true that he would continue to develop at a rapid pace throughout the rest of his brief career, but he would never surpass his first LP in terms of consistently high quality. The British and American versions of the album differed substantially when they were initially released in 1967; MCA's 17-song CD reissue does everyone a favor by gathering all of the material from the two records in one place, adding a few B-sides from early singles, as well. ~ allmusic.com 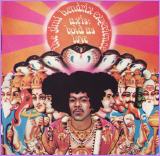 Review by Cub Koda
Jimi Hendrix's second album followed up his groundbreaking debut effort with a solid collection of great tunes and great interactive playing between himself, Noel Redding, Mitch Mitchell, and the recording studio itself. Wisely choosing manager Chas Chandler to record the album, since he was in the midst of a creative hot streak, Hendrix stretched further musically than the first album, but even more so as a songwriter. He was still quite capable of coming up with spacy rockers like "You Got Me Floating," "Up From the Skies," and "Little Miss Lover," radio-ready to follow on the commercial heels of "Foxey Lady" and "Purple Haze." But the beautiful, wistful ballads "Little Wing," "Castles Made of Sand," "One Rainy Wish," and the title track set closer show remarkable growth and depth as a tunesmith, harnessing Curtis Mayfield soul guitar to Dylanesque lyrical imagery and Fuzz Face hyperactivity to produce yet another side to his grand psychedelic musical vision. These are tempered with Jimi's most avant-garde tracks yet, "EXP" and the proto-fusion jazz blowout of "If 6 Was 9." 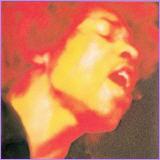 Review by Cub Koda & Sean WestergaardJimi Hendrix's third and final album with the original Experience found him taking his funk and psychedelic sounds to the absolute limit. The result was not only one of the best rock albums of the era, but also Hendrix's original musical vision at its absolute apex. When revisionist rock critics refer to him as the maker of a generation's mightiest dope music, this is the album they're referring to. But Electric Ladyland is so much more than just background music for chemical intake. Kudos to engineer Eddie Kramer (who supervised the remastering of the original two-track stereo masters for this reissue) for taking Hendrix's visions of a soundscape behind his music and giving it all context, experimenting with odd mike techniques, echo, backward tape, flanging, and chorusing, all new techniques at the time, at least the way they're used here. What Hendrix sonically achieved on this record expanded the concept of what could be gotten out of a modern recording studio in much the same manner as Phil Spector had done a decade before with his Wall of Sound. As an album, this influential (and as far as influencing more than one generation of players, this was his ultimate statement for many), the highlights speak for themselves: "Crosstown Traffic," his reinterpretation of Bob Dylan's "All Along the Watchtower," "Burning of the Midnight Lamp," the spacy "1983...(A Merman I Should Turn to Be)," and "Voodoo Chile (Slight Return)," a landmark in Hendrix's playing. With this double set (now on one compact disc), Hendrix once again pushed the concept album to new horizons.