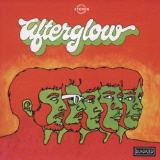 Being trapped in the rural outback of Klamath Falls, Oregon, in the days before they could spend all day watching low-budget science fiction videos, created permanent psychological havoc for Afterglow. They released the strain by making this ultra-rare psych album, parts of which could have served nicely as the soundtrack for junk TV masterpiece. While living in Chico California, in 1965 drummer Larry Alexander, bassist Mike (guess he didn't have a last name) and singer/guitarist Tony Tecumseh formed The Medallions. With Gene Resler taking over lead vocals, the quartet generated a minor buzz on the local club circuit. Unfortunately, with college beckoning several members, their musical collaboration quickly ended. The following year, though they were still attending school, the band decided on a reunion. With Ron George joining on bass and Roger Swanson handling keyboards, the quintet went into the studio with producer Leo Kulka.

As Afterglow the quintet signed with the small MTA label, debuting with 1967's cleverly titled "Afterglow". Co-produced by Larry Goldberg and Kulka, the album featured an interesting (if weird) set that straddled both Association-styled top-40 ("Riding Home Again" and "Dream Away") and progressive-cum-psychedelia (the organ-propelled "Morning" and "Afternoon"). Lacking a distinctive vocalist and bouncing all over the musical spectrum, the set wasn't particularly strong, cohesive, or original though one had to admit it had a weird, captivating appeal. Largely written by Tony Tecumseh, highlights included the rockin' "Morning" and the over-the-top group meltdown "Susie's Gone". Be sure to check out the cheesy organ solo on "Love".