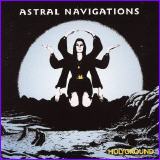 This album is actually improperly entered as by artist Astral Navigations, but this is really only the title of a split album by two British bands, Lightyears Away (featuring a young Bill Nelson in, most likely, his earliest recordings), and Thundermother ( a studio amalgam assembled by the label), but it has become popularly known as by this name. Side 1 features the L.A. mat'l, which is virtually all acoustic, but with 1 incredibly heavy psych cut, while side 2, by Thundermother, is heavy rock. To me, most of the acoustic L.A. stuff is dispensable, but that heavy psych cut is well worth the (steep) price of admission, while the Thundermother mat'l is good, though not necessarily outstanding. The mat'l was recorded between 1970~1. The original pressing is among the rarest UK collector items, and this legitimate, high quality re-issue by the original label in a numbered press of 450 copies sold out almost immediately. tymeshifter, Rate Your Music.