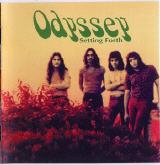 This is a very rare psychedelic/progressive collectors' item, from a Brentwood, Long Island, New York group and certainly the recent repressing/CD issue is well worth seeking out. The album is of a pretty consistently high standard. There's lots of heavy psychedelic guitar, upfront keyboards and very expressive vocals. The stand-out tracks include Society's Child, Church Yard and Angel Dust (although this last one is partly marred by a rather boring drum solo).

Michael Tschudin's composition You're Not There, was a reworked version of a track that appears on Listening's album. Original copies were issued in a plain white cover some of which were emblazoned with a title sticker reflecting the album title above. Most were in plain covers and this title does not appear on the record label.