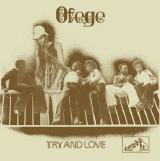 A blistering set of Afro-Funk from the 70s -- the debut of Ofege, a band of high school students at the time!

There's a really trippy sound to the set, as the guitars figure strongly in the groove, and are often recorded with some slightly psychedelic touches -- similar to Blo or some of the other headier groups of this generation. Wah wah lines often mix in with straighter fuzzed-out solos -- all driven strongly together by quick-snapping drums -- and vocals are by a young-voiced singer who brings some sweet soul touches to the English-language lyrics -- a nice contrast to the heavier sounds of the guitars!