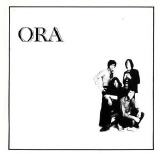 It is an album of incredible beauty, recorded by some talented young artists, Here is an extract from the original 1969 press release:

Jamie Rubinstein, 18, leader, lead vocalist and guitarist with the group called ORA, wrote all the songs on their new LP. He arranged most of them. While making the album Jamie was studing for his GCE A Levels. This is the group's first release, a single is being planned.
Jamie and Robin Sylvester, 18, who plays bass guitar, piano, organ, and is co-arranger, are the main-stays of the four-piece group. The others, lead guitarist Jon Weiss and drummer Julian Diggle, are "floating" members. Jamie, Robin, and Julian had met at UCS (University College School) in Hampstead.

"The key figure in this band seems to have been songwriter Jamie Rubenstein. Not many copies of their original album, which was effectively a collection of demos, were pressed almost inevitably ensuring its status as an ultra-rarity. It contained a number of pleasant sometimes whimsical, and even haunting songs plus a frenzied piece of psychedelia, Witch, that was untypical of their sound but now 25 years on is the main reason for its collectability. All the other cuts have female vocals with the best being Fly, which opens the 'B' side. This is based on a fast Take Five (Dave Brubeck) rhythm with electric guitar accompaniment and some good electric guitar leads. Are You Seeing has some electric guitar leads, too, towards the end. The other tracks are acoustic-based with gentle melodies. The Seagull and The Sailor, The Morning After The Night Before and Emma's Saga (especially the latter) have a Samba feel, with sparse guitar accompaniment and discreet percussion only. Overall this was a good album of beautiful songs.

The recent CD reissue includes seven bonus cuts which mostly consist of alternate versions of songs on the album. The accompanying booklet includes a band history which Jamie Rubenstein has contributed to.